Trudy “Tru” Walker (named after the famous author, Gertrude Stein, from the ‘20s, instead of Judy Blume or Ann Martin, like she wanted) is a normal teenager: she has dreams and aspirations, friends, a mom, a major crush on Billy Meier and, oh yeah, a twin brother with special needs.

Because of Eddie, Tru believes she isn’t as normal as everyone thinks. She can’t do “normal” teen things like hang out at with her friends by herself or go to parties without feeling guilty or even go to the mall without fear of Eddie having another panic attack. And she and Eddie can’t even do normal twin stuff like switching places like Mary-Kate and Ashley do.

But don’t get her wrong. Tru loves her brother more than anything and would never wish to be without him (although she does wonder what it would be like to be an only child), but she does wish she could do something to make him “normal.”

While reading her computer journal, you can get inside Tru’s mind and journey with her as she goes through life learning to trust her mother, learning the truth about her crush, chasing her dreams and discovering that, while he may be “different” by the world’s standards, Eddie is perfect just the way he is.

I looked through my bookshelf once again and decided to read Tru Confessions. (Even though it wasn’t exactly what I had been craving; but I had seen the movie and decided to give the book a go.)

Having seen the movie first (I never even knew it was a book until I stumbled upon it at a Goodwill bookstore a few weeks back), I am slightly biased. So, please, read the book and make your own judgments; I’ll just tell you my opinion.

Personally, I enjoyed the movie more than I did the book (Shia LaBeouf, hel-lo?) and it may have been just because I had seen it first. But honestly, I don’t think I would have watched the movie if I had read the book first. The book seemed to me to have been slapped together. Several scenes (mainly “B.J’s Sleepover”) didn’t really have anything to do with the plotline and could have, quite easily, been removed.

I understand that Tru Confessions was written as a journal and many journals are often incredibly random at times, but as a book, I feel it could have been placed together much better.

I finished this book in one day, not because I really enjoyed it that much or because it was all that much of a page turner, but because it was a very simple read; something you would sit down and read to take your mind off of life; a book where you don’t have to think and contemplate too much over what you’re reading. The writing format, from journal entries to lists and goals to Eddie’s random computer graphic doodles, makes for easy reading.

But I don’t feel that Ms. Tashjian did a very good job of making her point. I don’t feel anymore educated on the lives of the mentally handicap and their families. It almost seemed as if Eddie was just a back story, a secondary plot-line, not primary.

Overall it was a good book. It was easy to read, humorous and a good story. Whether or not I will run back to read this story again? Well, probably not. But that’s just my opinion. Read it for yourself and tell me what you think. 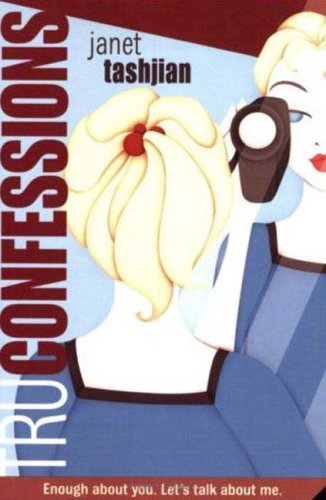 
Buy from Amazon
The author's comments:
Everyone needs to see the DCOM, "Tru Confessions"! It's AMAZING!!
Post a comment
Submit your own