Hang a Thousand Trees With Ribbons by Ann Rinaldi

Favorite Quote:
"My thoughts are stars I cannot fathom into constellations."

Hang a Thousand Trees with Ribbons by Ann Rinaldi
Number of stars (1 to 5): 4


Poetry has come a long way since the 1700's. There was one person in particular that revolutionized poetry and that was Phillis Wheatley, the first African American poet.


In the beginning, Phillis is about to enter what Nathaniel called the “Lion's Den.” This was where it would be decided if her poetry was actually written by her. Right before she enters, there is a flashback. At first, I was confused because I didn't know what was happening, but I realized the book was telling me her journey of how she became a poet. After a few chapters, it skipped a few years and went back to the ”Lion's Den” scene. This made me even more confused. I did think how she started learning how to read and write was interesting. At first, Nathaniel thought she could read when she saw the word umbrilloes on a catalog. Phillis then told him she couldn't. A year later, she read a whole catalog at dinner and said some Latin, as Nathaniel had taught her. She also learned Greek. Nathaniel's parents were surprised and very excited.

I would give it four stars because it was a good book. Like I said, it was detailed but not boring. It kept you wanting to read the whole thing in one sitting. It was confusing sometimes, though. It didn't blow me away, either.

It was an interesting book, especially since Phillis wasn't raised like a normal slave, but as though she was part of the Wheatley family. Life was very different back then.

Over all, it was a pretty good book. If you want something different to read, try Hang a Thousand Trees With Ribbons. 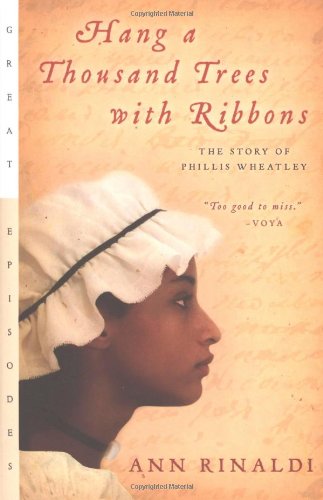