A Little Piece of Ground by Elizabeth Laird | Teen Ink

A Little Piece of Ground by Elizabeth Laird

The ten best things I want to do (or be) in my life.
By Karim Aboudi, 15 Jaffa Apartments, Ramallah, Palestine.

1.
Champion footballer of the entire world (even I can dream).
2.
Extremely cool, popular, and good-looking and at least 1.90 metres tall (or anyway taller than Jamal).
3.
The liberator of Palestine and a national hero.
4.
Famous TV presenter or actor (famous, anyway).
5.
Best-ever creator of new computer games.
6.
My own person, allowed to do what I like without parents and big brothers and teachers on my back all the time.
7.
Inventor of an acid formula to dissolve reinforced steel as used in tanks and helicopter gunships. (Israeli ones).
8.
Stronger than Jamal and my other mates (this is not asking much)
9.
Alive. Plus, if I get shot, only in the places that heal up. Not the head or spine, inshallah.

Added at a later date:


This is the list of wants for a twelve-year old boy living in Palestine, under Israeli occupation. He along with his two friends, Joni Boutros and a mysterious boy from the refugee camp nicknamed ‘Hopper’, all hate the enemy and (with, possibly, the exception of Joni) are willing to become martyrs to free their country. They find a little piece of ground to call their own, and start clearing it to make a football pitch. They make a secret base out of an old car, oil drums, and other garbage, and even make a Palestinian flag out of painted stones in the corner. Karim and his friends start to enjoy their little piece of ground, but the enemy is always lurking nearby, ready to smother these hopes of happiness…

I completely loved this book. I think that it is important for people to read books from both points of view so as to better understand what is happening, and also so that we can avoid bias or prejudice when looking at this situation. Sometimes when we watch the news we feel really far away from the fighting going on in Palestine, but this book really takes you into the life of those who are being oppressed, and all their everyday fears.

I liked it more than I thought I would, because this book is not a documentary on what is happening in the Middle East, it’s a story of the life of a young boy who just happens to live in Palestine at the time of the occupation. The book focuses just as much on the conflict of the occupation as the conflicts Karim has with his parents, siblings, and friends. The book is not entirely one-sided, even though the protagonist is thoroughly against the Israelis, because of what Abu Feisal tells Karim about the enemy, ‘They are bad, good, moral, immoral, some greedy and vain, some kind-hearted and suffering, all just men, women, and children- just like the rest of us. Human beings’.

I loved the brotherly care between Jamal and Karim, both when Jamal wants the picture of Violette (which I found hilarious) and when Jamal rescues Karim from the scolding of his parents, and ultimately, the Israeli soldiers. I also loved how the deaths and killings were reported through a news cast, which I found very creative.
The author took a difficult topic and wrote a great story out of it! 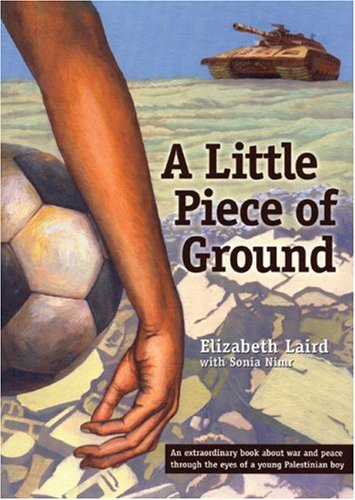 nabr said...
on Feb. 1 2014 at 4:23 am
Can someone send me a site were i can find a full summary of the book plaese
Harebelle GOLD said...
on Aug. 28 2011 at 12:47 am
Harebelle GOLD, Vancouver, Other
14 articles 1 photo 118 comments
View profile
Thank so much! I agree with you, and that is part of the reason I loved reading this book.
Sum1 said...
on Aug. 27 2011 at 8:49 pm
This book was very controversial when it came out.  I applaud Elizabeth Laird for being very brave to write about something from the point of view of the 'other' side.  I applaud you for being brave to write a very good review of the book.  Not many people have probably read this book because of its topic.  I think people should be open minded enough and read the book.  It's a good one and definitely one that can be a subject of numerous discussions.