The Road, published in 2006, is a post-apocalyptic book written by Cormac McCarthy. While on a trip to El Paso in 2003, McCarthy came up with the idea for his novel, after picturing “hills on fire.” This book is 256 pages of misery, fear, hunger, exhaustion, cannibalism, and a small spark of hope. Unless the reader is planning to sacrifice large amounts of time and sanity, this book is a tedious work that will inspire many to go for a walk afterwards in a forest and try and clear their minds. Despite being one of the most depressing books of modern literature, the Road is still poetic, mysterious, and heartwarming. Still reading this?

Here’s the general picture: A natural/manmade disaster has wiped out most of the life on planet earth. The cities are mostly made up of charred skeletons, skeletons of burned-out buildings and piles of trash. Survivors join groups of refugees that stumble into the countryside and die of hunger or kill themselves. Eventually the earth’s inhabitants (or at least the United States) consist of cannibals and scavengers. The cannibals roam the desolate land in groups of half a dozen to a dozen, enslaving and eating anything they come across. The scavengers search garbage dumps and occasionally steal from other survivors. In this unholy mess a father and son try to survive, wrapped in ragged clothes with nothing but a revolver and two cartridges to keep the above-mentioned denizens at bay.

The man, the father, has to constantly worry about the safety of his son. He is around forty years old and remembers what the world was like before it went to hell (the world had more sunshine, fewer people driven insane by hunger, and a lot more plant life). The father knows he is dying from choking on ash and tries to keep his son alive enough until they get to the coast. His son is a silent, emaciated boy, who even to the man seems like an alien because the boy never knew of the previous world. The son, often called “the boy” by the narrator, tries to keep his father more humane and his sanity intact. The struggle and relationship between the two of them is heartbreaking and makes the reader want to reach out to them and hand them a can of food, or a bottle of clean water.

The protagonists are easy to keep track of because the other survivors are: A paralyzed man burned by lightening, various Southern-style cannibal militias, captives locked in a basement waiting their limbs to be harvested, an old senile man, a thief with half of his fingers cut off, and a man and woman that try and kill the father with a homemade bow and arrow. The father eventually leaves his son to an uncertain future by succumbing to the inevitable. Though oddly touching in terms of the love the small family shows for each other, the rest of the situation is absolutely hopeless. The cans of preserved food will eventually run out, as will the amount of edible human flesh. The water is already polluted and undrinkable. Eventually everyone will die, which will, in the words of the soothsayer-like old man Ely, make the world a better place. 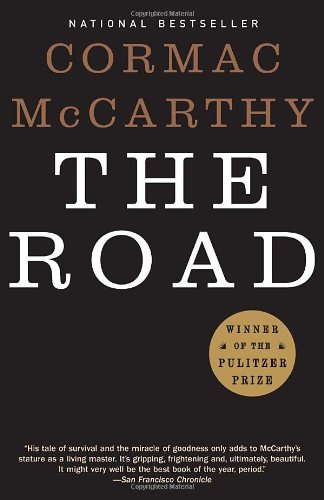 
Buy from Amazon
The author's comments:
Always reminds you that there's someone out there who is worse off than you.
Post a comment
Submit your own