John Knowles is not only a skilled and resourceful author, but also one of the best kinds of philosophers – the type that makes you think about problems without telling you to directly. A Separate Peace is not only a riveting tale of the coming-of-age conflict between two boys during World War II, but also a beautiful analogy using WWII and the nature of humankind.

The protagonists are students at a boarding school during the war, and as the violence rages, they peacefully grow and learn and play at school. The main characters, Gene and Finny, end up characterizing the war itself: two sides of a conflict, each striving to outdo the other but hindered by his own humanity. Hindered by the fact that human nature is not war, but to react to the war-impressing circumstances of the world they live in.

Blind impulses and violence only intensify the conflict between the two best friends. As one heart-breaking tragedy leads to another, the author continues to personify the world around them. A comfortable rhythm of imagery and sensations floods the reader's mind, broken continuously by climaxes that spike the end of each chapter.

Knowles shatters the normality he builds, describing a bland but passable world, then brightening it with unique characters. The only possible way to end the story is obvious, but that's not the surprise awaiting you. The surprise is realizing that the reason you know what is going to happen is because what happens is, in the deepest and purest sense, human.

Human nature, combined with the nature of the world the boys live in, creates the conflict and its ending. Knowles constantly describes the world using vivid imagery and disturbingly accurate sensations of anxiety and happiness. Then, in short, raw bursts, he lets the characters sharply contrast their world with their unique personalities. This book is a masterpiece of philosophy and literature; it's a must-read for anyone. 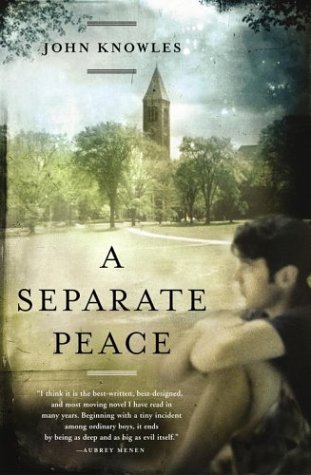 
Buy from Amazon
The author's comments:
I had to read this book in class, and would not have known about it if it weren't for the United States education system. Thanks guys!
Post a comment
Submit your own

Favorite Quote:
Never tell your problems to anyone...20% don't care and the other 80% are glad you have them.
- Lou Holtz

View profile
well personally, i clicked on this link because of the cupcake but i am going to read it later.....=)