The Hounds of Baskerville by Sir Arthur Conan Doyle

The renowned Holmes receives a plead from yet another desperate man, but this time, the one behind the threats is neither man nor beast. It is a hellhound, one so terrifying that some poor soul died simply from looking upon its flaming jowls. The visibly shaken man tells tales of family curses that may very well be true, and he speaks of his fears for the young (and therefore most likely ignorant in the face of the supernatural) Henry Baskerville. Henry would be the lone surviving heir to the Baskerville estate, yet ‘tis the moors beyond of which he must fear, upon which his uncle died of fright of the hellhound. Alas, it seemed that Holmes dismissed the tales for what they were (fanciful fairytales told by addled peasants), and leaves the case and Henry’s safety to his assistant Watson. The poor, lost Watson is immediately thrust into a romance of escaped convicts, bitterly weeping maids, sensible men gone mad, and above all, love affairs. Trouble is, Watson doesn’t have Holmes there to separate the ungodly facts from the everyday, and his charge is slowly succumbing to the madness of the haunting moor and its devil hound.

And at the moment where it seems the surviving heir won‘t survive, Holmes chooses to make a dramatic entrance, telling Watson all he knows of the case and that he suspects Stapleton (the mild-mannered naturalist neighbor of the late Baron of Baskerville) to be the culprit. There are shots heard, the inhuman screams of a chase, and the howling of a demon hound. There’s a grisly sight of a dead man wearing Henry’s suit. Then there’s lamentation, they are sure the last Baskerville is dead. But, hallo, what’s this? He may be wearing the heir’s clothing, but this is the escaped convict, not Henry. Ironic, for a murderer to be murdered by another, but the game is still afoot, the heir lives yet. But to keep Henry from slumbering in a pine box, Holmes will have to use him as nothing other than bait. One thing even the ever-witty Sherlock couldn’t deduce, however, was the coal black, flame throwing, lion dog that came upon Henry’s throat whilst he walks home that night. In six shots the creature lies dead, the Baskerville still lives, but the “naturalist” Stapleton has disappeared from the dining hall. Yet they are too late, the bog has claimed him, the fiend has been buried in the curst soil he wished to inherit from Henry’s death. But at least the last Baskerville has been saved, brokenhearted and traumatized, but breathing still.

Months later, Holmes analyzes the case. Naturally, “Stapleton” was an alias for Mr. Vandeleur, the hellhound was simply a mistreated animal covered in phosphorus, and the poor late Baskerville truly did die of fright upon seeing the nightmarish canine. Of course, there was a Baskerville in Canada that Vandeleur did not know about which might have hampered his plans slightly. Whether he would’ve dealt with him in the same manner or not, well, that would be an entirely different story if not for Holmes.

Set in 1889, in both London and Devonshire

Holmes’ nearly miraculous reappearance at a time where Watson was simply peppered with troubles, and it greatly boosted his old friend’s morale. Watson had been on his own for such a time as that he nearly began to believe in the force of evil as something other than a murderous human mastermind, and that curses aren’t wholly imprisoned within fairytales. Of course, the ever indifferent Holmes immediately chased all dark superstitions away with only cold, hard, elementary science. He also takes all threads the frustrated Watson had been following and basically hands the mystery back to him gift-wrapped. He explains the lives of the two women Stapleton manipulated to satisfy his own selfish desires, Laura Lyons and his own wife. Miss Lyons had just recently been trapped with a divorce she couldn’t pay, running away from marriage to an abusive sort with a father who looks the other way and lets his own daughter starve.

And Stapleton had told her he would marry her and pay off all her debts if only she would lure the late Sir Charles Baskerville out onto the moors into his trap. He then states the inconceivable, the beauty masquerading as his sister was, in truth, his wife. (whom he threatened into silence) And he used his wife to be yet another lure for the unsuspecting bachelor, Henry. Being Holmes, Stapleton shan’t escape with another Baskerville murder. For as Stapleton believes he has seized the prime opportunity to draw his web of lies tight over Henry, Sherlock is only towing the serpent deeper into his own planned fate for the cold-blooded monster.
Overall, this novel helps you realize why Sherlock Holmes really is the "Man of Mystery." 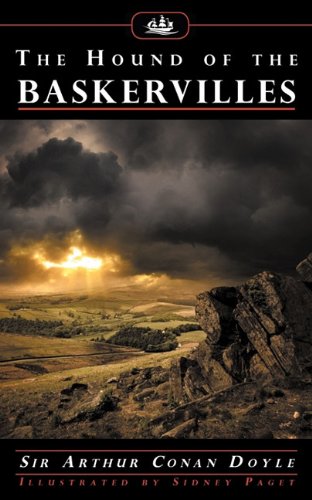 
Buy from Amazon
The author's comments:
Basically a book summary, nothing more, nothing less....I guess?
Post a comment
Submit your own