War of the Worlds by H.G. Wells | Teen Ink

War of the Worlds by H.G. Wells

H.G. Wells is honored with the title, “Father of Everything Sci-Fi” for a great many reasons, but the main ones would be his capturing every single aspect of realism and the unknown in a single word. His words are a reflection to our human weaknesses, and that of the greater threat of the great many things we don’t have control of, which is an idea that, at best, leaves us trembling at dark corners. He speaks of the alien life forms of something not in style romantic at all. Though, at the time, many writers were taking literary liberties and explaining even cold-blooded convicts to be, in some form, a love interest. But, in the case of the Martians, he leaves no romantic leeway.

Those who had never seen a living Martian could scarcely imagine the strange horror of its appearance……the Gorgon groups of tentacles….the painfulness of movement due to the gravitational energy of earth, above all the extraordinary intense immensity of those eyes. Even at this first encounter, this first glimpse, I was overcome with disgust and dread…….

The narrator’s words immediately strike a chord of what could be curiosity, I can imagine this novel’s first readers asking questions upon those first few phrases drifting in front of their eyes. An appearance, so horrible, I can scarcely imagine it? A group of tentacles like that of ancient Greek myths? Those eyes, would looking into those eyes be as seeing that of a far more intelligent being, or one simply less compassionate? A being that could horrify an able grown man, one belonging to an empire so strong that it conquered it all, how could he fear these creatures that were no better than squids?!

The Martians surely are horrible, in fact, the narrator uses words demoting humanity to that of a fool dodo underestimating the might of a hungry band of hunters….with guns. Then, this brings us to the second reason, the mighty earthlings’ counter attack. We could kill them, right?

Guns, a mere bee sting. Overwhelming forces, insufficient. The greatest military minds, fools. Our prided inventions, barbaric. And above all, our emotions get the better of us. A man killed himself for handfuls of gold, voluntarily let his spine snap in two. People rush past a great authority figure, leaving him for dead on the streets. And then, there’s the crowds, a biblical exodus, an apocalypse, insanity. Our dreams of ever beating the Martians have fled, but we plan on following our dreams‘ dramatic escape. Get….us…..out. Science fiction, the great father of it all, naturally then, he must show us to be the lowest of the low at times of crisis. Run, run, for heaven’s sakes, the THINGS are coming, they’ll kill us all.

But first, we squabble. I need to bring the teddy bear, don’t forget the gold, the silver, the pennies, mama’s prized sewing kit, a pot of orchids, my azaleas! Think about it, a tornado is coming straight for you, but you just can’t leave. You notice the storm’s coming as you might of a particularly nasty bout of wind, it’ll blow over. Not so, Wells does it again, humanity’s on the run, dragging the kitchen sink. And then humanity gets a tad smarter and decides to leave everything but food and steal on the way over if you run low, all you see of the humans’ reactions are manic running.

Then, here comes reinforcements! Call backup, get them down here, oh look, the military! Wells obviously knew sci-fi was a definite new level on writing in his time, so he must put his genius into terms we can relate to. “Shooting red lasers out of their hands that incinerated everything in sight.” would cause some inevitable reading confusion. In come the inventions, for example, the flamethrower or the Martian’s “heat ray.” Like a flamethrower, it killed on contact, unlike it, it had deadly pinpoint accuracy that gave readers chills. He also compares the shape of the heat ray as a weapon to that of a camera. X-rays were these examples of radiation, something deadly you could not see, but still slowly died from.

Another scientific advancement in itself would be the planet of Mars, using what little he knew, he created the beast that is and was the Martian. He also uses common knowledge of gravitational pull on the usually light-weighted alien, and how their own planet is much older than ours. Overall, Wells could be considered the father of science fiction simply for the way he can tell a horror story in a way so indifferently that, down to it, it’s a science.

Thus, with H.G. Wells, science fiction was born. He could create this hideous creature with feelings, possibly a shadow of humanity as taken over by power lust, our own reactions to crisis, followed by greed and mayhem, and then technology, war, and what it could become if we lose control. All in all, his books are a message to humanity, those THINGS are what you can become if you lose control, you may lose your soul. And you will never always be the best forever, someone is lurking in the background, someone you will only see when it’s too late…….

A Martian of sorts, so to say. And it may come back with a vengeance. 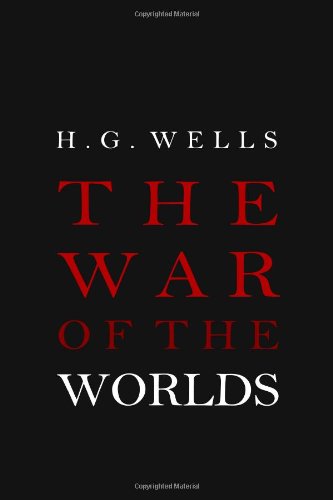 
Buy from Amazon
The author's comments:
I wrote 2 reviews on War of the Worlds, the other review is a comparison of movie/book versions while this is THE review on the novel. And it's also a tribute to H.G. Wells.....
Post a comment
Submit your own