Thirteen Reasons Why by Jay Asher

After Hannah Baker kills herself, a set of cassette tapes are sent
to a list of thirteen people who are somehow responsible for Hannah’s death.
Clay, a quiet boy who had a crush on Hannah, receives these tapes. Clay has
absolutely no idea why he received them or how he’s responsible for Hannah’s
death. After taking his friend Tony’s Walkman, Clay spends the night travelling
his town while listening to Hannah’s voice. And what Hannah says will change
him forever.

Set in first person, alternating between Clay’s perspective and Hannah’s tapes, Thirteen
Reasons Why tells you a huge message about life: that your actions, even if
they seem perfectly harmless to you, could cause somebody else harm, and
ultimately cause them to commit suicide. As Hannah says in Thirteen Reasons
Why, “I guess that’s the point of it all. No one knows for certain how much
of impact they have on the lives of other people. Often we have no clue.”

I loved this book because it was written so beautifully and flawlessly in the way
that Jay Asher switched between Clay and Hannah’s perspectives. Also, the main
characters seemed so real that it made you think that you could actually talk
to them, or change their mind, but in the end, you couldn’t. In the end, they
were only fictional characters. This was especially true when Hannah says,
“If you hear a song that makes you cry and you don’t want to cry anymore,
you don’t listen to that song anymore. But you can’t get away from yourself.
You can’t decide not to see yourself anymore. You can’t decide to turn off the noise in your head.”

I also loved this book because it was so real. It controlled your
emotions so well that this book made me cry. Lastly, Thirteen Reasons Why conveyed
a message so achingly true that it changed my view on life itself.

I gave this book a five out of five because I absolutely loved it. It’s so real,
mesmerizingly incredible, and beautiful in such a raw and deep way. It’s
written in such a way that it makes you keep reading, and even when you’ve
finished it, you can’t stop thinking about it. I would recommend this book to
everyone, teens and adults alike. Thirteen Reasons Why gives such a
clear and moving message that should be heard and understood by everyone. 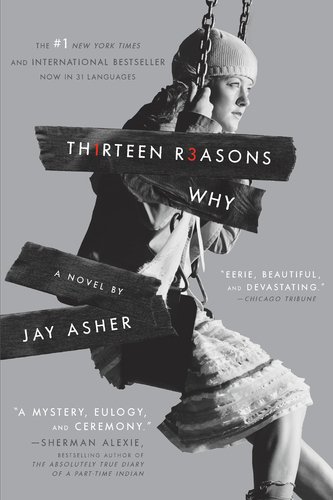