Favorite Quote:
Unless someone like you cares a whole awful lot, nothing's going to get better. It's not.
-Dr. Seuss

I had fallen out of reading. High school took too much time, and there were more important things to do than read for pleasure. At least, until I started this series. I had seen the book in the bookstore a million times, and never picked it up, usually because I knew what I needed to buy. But when my friend told me that City of Bones by Cassandra Clare was a must read, I happily obliged. And wow, was I stunned!

The Mortal Instruments Series follows sixteen year old Clarissa "Clary" Fray, a human girl who stumbles upon three other teenagers killing a demon in a nightclub. These three teenagers- Isabelle and Alex Lightwood and Jace Wayland- are stunned that Clary is able to see them, as they are of a different race called Nephilim, which normal humans cannot see. Also known as Shadowhunters, the half angel humans exist to rid the world of demons. But when Clary's mother is kidnapped, she has to use her unique abilities and the knowledge of her newfound friends to help get her back. At the same time, she has to figure out her relationships with her best friend Simon, as well as the handsome Jace Wayland.

This book is a great example of what a romance-fantasy mix should look like. There are enough plot twists and action scenes to satisfy those looking for a fantasy novel, but also plenty of heart wrenching moments to appease the hopeless romantics. The balance between these two themes is impeccable, and fits the target teenage audience perfectly.

I loved City of Bones. I thought the story line was incredibly creative and I could easily identify with the real world problems of Clary Fray. I couldn't help but love all of the characters, from awkward Simon to dreamy Jace to tough Isabelle. I would recommend this book to anyone.

As it is part of a series, City of Bones is followed by four more books. There is also a prequel trilogy, called The Infernal Devices, and another trilogy (The Dark Artifices) will follow. 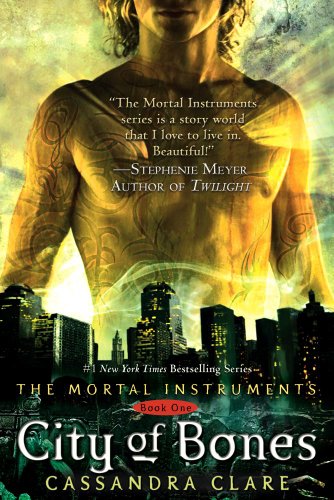 Favorite Quote:
"Be a Fruit Loop in a world of Cheerios."

View profile
I love those series. If I had time to reread such a thought out plot and development, I would. After the Infernal Devices, these series are one of my favorites. It really makes my emotions run wild and I can never get comfortable with anything good happening, because a couple pages later someone is about to die. It was good while it lasted, is pretty much what I think every time. Cassie loves to deceive and hint and just be an awesome author. I love her.