The Fault in Our Stars by John Green | Teen Ink

The Fault in Our Stars by John Green

Favorite Quote:
The voracious ambition of humans is never sated by dreams coming true, because of the thought that everything may be done better and again. --John Green, The Fault in Our Stars.

"The fault, dear Brutus, is not in our stars, but in ourselves."
I found this quote (which is the theme of The Fault in Our Stars) to be many things--confusing, frustrating, beautiful, and brilliant. To me it means that we can't blame fate or luck whenever we get to a bad place in our lives, WE are the ones to blame. The fault, the consequences, are not because of fate, it's because of ourselves, because of the choices we made.


Now that's not to say it's always our fault. Sometimes good people are put in crappy situations for no fault of their own. It just happens. But still, we can't always blame fate. After all, they say we control our own fate, our own destiny.

I found The Fault in Our Stars to be much like that quote: confusing, frustrating, beautiful, and brilliant--which I suppose was the point. It is one of those books that makes you FEEL something, and those type books that not only teach you something but make you feel something, make you see the world in a completely different light, are a rarity.

I felt something stirring inside myself. Something I could tell was strong and had deep meaning. But I couldn't define exactly WHAT it was I was feeling. It's confusing, but beautiful, in a terribly frustrating sort of way. 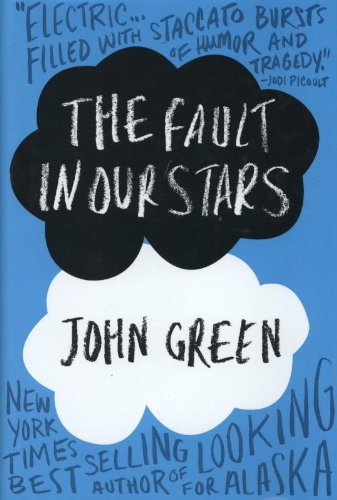 
Buy from Amazon
The author's comments:
This might not be your typical book review, but it's my first one so I hope I got it right. I just wanted to share what I felt when reading this book, and what I hope other will feel as well.
Post a comment
Submit your own

Philia said...
on Jul. 31 2013 at 3:52 pm
Good! I just finished two of John Green books - Paper Towns and Abundance of Katherines. This one seems promising too. P.S. Check out my Paper Towns review and other works. And don't forget to comment.
TheSkyOwesMeRain GOLD said...
on Jul. 27 2013 at 12:42 pm
TheSkyOwesMeRain GOLD, Irvine, California
13 articles 1 photo 299 comments

View profile
That was amazing! I just read this book, and I seriously think it was the best book I ever read.