“Revolution is not a Dinner Party” | Teen Ink

“Revolution is not a Dinner Party”

“RDP” is an amazing book that doesn’t hold back any of the brutal torture the Chinese went through during the ‘Revolution’. It is one of the best historical fiction books I have ever read.

This book takes place during a Revolution or a building of a new China.
It begins with a happy girl named Ling Chang. Her father is a highly ranked surgeon and her mother an incredible nurse. In China at this time a revolution is taking place. The leader of the Revolution is Chairman Mao who is kind of like their President, but one with ultimate power. One average day in the Chang household, a soldier appeared. This soldier by the name of Comrade Li would be staying with them for a while as the Revolution went on. Comrade Li seemed like a nice person at first and Ling would occasionally trade things with him, such as some eggs for a new piece of origami for her collection. Soon enough, she found out that Comrade Li was not a nice man, as he took away her very close friend Mrs. Wong’s husband. They said that he was an “anti-revolutionary”. After this arrest no one ever saw Dr. Wong again. A little bit later Mrs. Wong too was taken away. The soldiers started stricter tactics and people were sent to labor camps or even killed on the spot for any sort of treason.

Economy problems had erupted throughout the Revolution and soon everything was to be rationed. It eventually got so bad people would steal, beg, or fight to get food. One young boy had said that Revolution meant going hungry and he was immediately sent to a labor camp. If things weren’t bad enough Dr. Chang had become known as an anti-revolutionary for standing up for a doctor who was being killed as an example. After a few weeks passed Dr. Chang was sent to jail. Ling was treated horridly at school and was occasional beaten by a boy named Gao. Mrs. Chang and Ling had grown very poor and sold any items that they could for money for food.

During a painful day of school, the intercom went off in Ling’s classroom. Chairman Mao had passed away in his sleep. A deep sorrow filled the land and it actually became a requirement to cry an hour in the morning and an hour in the afternoon. Ling had no problem with the crying, she cried for Mrs. Wong, her house which the soldiers had wrecked, the food she couldn’t eat, and most of all her father. Things were sure to look up though when she heard some soldiers speaking of Comrade Sin (Gao’s father) illness and that Dr. Chang was taken out of jail to treat him. They had specifically kept him close so that he could work on some of the wounded and then be sent back.

In the end Dr. Chang is freed and gets his job back, new leadership comes over China, and the hope that China will really be the best it can be was strongly renewed. 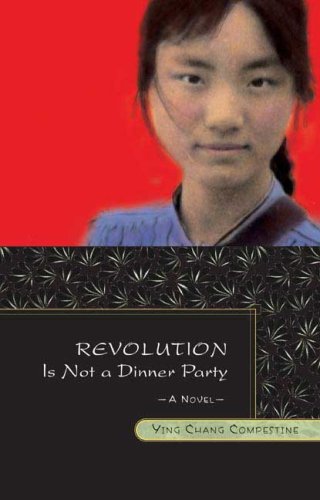 
Buy from Amazon
The author's comments:
I read this book around a year aog. It was really, really good! I would reccommend this book to everyone.
Post a comment
Submit your own