Pretty Little Liars, a novel by Sara Shepard, is a wonderful choice book to read over summer break or anytime you feel like solving a scandalous mystery that centers around five best girlfriends. The plot? Just complicated enough to keep you intrigued. The twists and turns? Not so complex that you have to annotate to keep up. The characters are richly described and well developed. Unlike many other novels whose protagonists are teenage girls, Shepard's characters are complicated, sympathetic, and deal with real life problems just like a typical teenage girl.

Pretty Little Liars is set in a fictional town called Rosewood. The name of the town has great symbolic meaning because like a rosebush, this town is beautiful but thorny. The events of the story center revolve around the mysterious disappearance of the Queen Bee of the group. Among these five girls are many different secrets that only one person knows about. The Queen Bee, Ali D'Laurentis.

Once Ali goes missing, the girls are publically sad but secretly relieved because with her die their secrets. A few years later, when Ali's body is found buried in her lawn, the girls start receiving text messages from a private number reopening their hidden pasts. Now the real mystery begins; who is this "A" person sending them threatening texts? Is Ali truly dead or is she alive?

A fun part about reading this book is that the narrator addresses the reader directly giving us clues about the mystery to which the characters are oblivious. For instance, at the end of each book of the series, the reader receives a note from "A" revealing a new clue about who "A" is and what is next on "A's" mind. This has the effect of making the reader anxious to begin the next series.

Pretty Little Liars is an addictive read full of secrets and scandals. The series is made up of five books and somehow Shepard manages to include new details, news diversions, and new dramas. I recommend this book for teenagers ages thirteen to seventeen who enjoy a thriller. 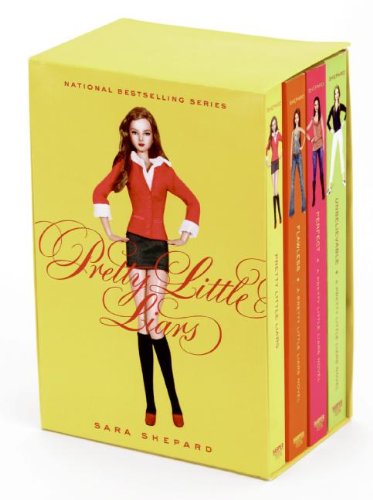 I Love this show I t

wish it would come back on!