Orphaned in nineteenth century New York City, Carver Young has a great future ahead of him. Anyone may see the young man bursting with potential as he waltzes down the NYC streets, analyzing each detail. Soon after finding a letter from the father he never knew in the orphanage, Craver is adopted by retired agent Albert Hawking. Through Hawking, Carver has the opportunity to learn how to be a topnotch detective – there’s just one catch. Carver has to find the identity of his father. But as mysterious killings spring up in NYC similar to the horrendous “Jack the Ripper” Carver doesn’t know who to trust with his deepest darkest secret—that carver thinks that The Ripper is his father.

“Ripper “By Stefan Petrucha Was absolutely phenomenal! I enjoyed it immensely. Once I opened the book I couldn’t close it. Petrucha did a beautiful job of setting the 19th century theme and a stunning job of plot. I always enjoy a good mystery novel but this is one of my favorites. Petrucha’s character Hawking was artfully made, and his relationship with Carver leaves the reader yearning for a sequel—which we may not get. It truly felt, as I was reading, that I was with Carver, I only knew what he knew and discovered what he discovered. That is a feat and I applaud Petrucha.
I recommend this book for anyone older than 12 years (due to the nature of Jack the Ripper) and anyone who loves a great mystery.
5 stars out of 5 Goes to this book, which is the highest rating I can award a book. 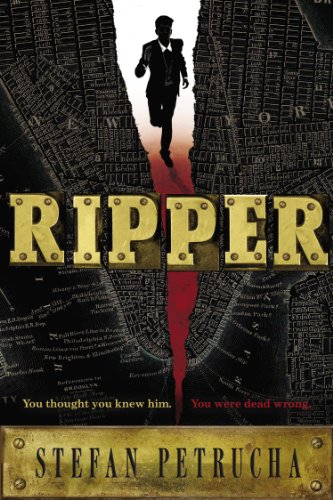 
Buy from Amazon
The author's comments:
I picked this up at good ole Second and Charles and loved it! It took me a while to post this-- my fault, the busy world took hold of me
Post a comment
Submit your own