everybody kills somebody sometimes by Robert J. Randisi | Teen Ink

everybody kills somebody sometimes by Robert J. Randisi

Robert Randisi creates a charming, fast pace mystery novel for the ages in his incredible book everybody kills somebody sometimes! This novel is a pulp fiction mystery book taking place in 1960’s Vegas following a Casanova blackjack dealer from Brooklyn named Eddie Gianelli. Eddie is contacted by his boss & is told that a certain someone needs a favor from him, due to Eddie’s vast connections in Vegas. Who’s this someone you may ask… none other than frank Sinatra & the Rat Pack, a group of entertainers that consisted of Frank Sinatra, Sammy Davis jr, Joey Bishop, & Dean Martin! Frank tells Eddie that Dean had been getting death threats & would like to keep the police out of it while their filming the original oceans 11. So it’s up to Eddie to track down a seemingly harmless threat sending punk for someone very famous. Not realizing that he would get mixed up in 3 murders, cracked ribs, & a car bomb before he can say New York, New York!  This book is an easy read, full of color & fun. With characters that feel & act real, all including the iconic Rat Pack & is full of historic accuracy, like the involvement of Sinatra in JFK’s election campaign! You’ll be on the edge of your seat the whole book guaranteed, not to mention that it is only the first installment in the Rat Pack Mystery series! A must read for anyone who’s a fan of Sinatra, Vegas, murder mysteries, or the seductive appeal of the 1960’s crime novel, sure to send you falling asleep to my kind of town, this book is a must read for anyone! 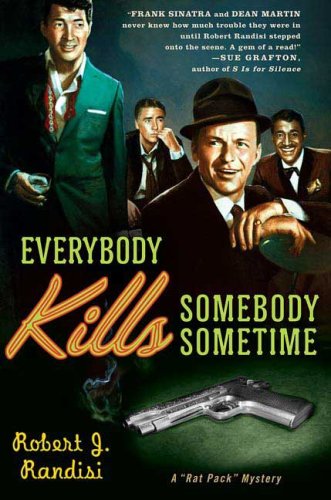 one of my favorites, it's also just the first of a long series so there's no reason not to dive in as soon as you can!