Requiem for a Dream | Teen Ink

Requiem for a Dream

Darren Aronofsky is quickly proving himself as one of the greatest directors of his generation. His first film, “Pi,” was an extraordinary piece, which showcased the young director's immense talents, foreshadowing his influential role as a filmmaker. His 2000 release, “Requiem for a Dream” not only assures us of his consistency, but raises the bar for modern filmmakers everywhere. I am not going to say that this was a perfect film, or that Aronofsky is the paramount of directorial skill, but his innovative style injects new energy into the industry.

The film stars Jay Leto, Marlon Wayans, Jennifer Connelly, and Ellen Burstyn (who gives a towering performance as the frail Sarah Goldfarb). This is Jay Leto's greatest achievement as an actor, his other films being simply afterthoughts.
The script (adapted by Hubert Selby jr. from his book of the same title), is intelligent and layered, allowing the audience to connect with characters the may have nothing in common with. We feel sympathy for people we otherwise would not care about. This is because the film does not just show us characters… it shows us their transformations. These are people you pass on the street, crouching and babbling on the sidewalk. You wonder what it is that makes a person do this, and finally conclude that they were just born this way. This makes them easier to pass by and forget about: they have no decent past. Aronofski shows us that they do indeed have pasts, friends and families who they used to invite to lunch, sit and talk to, go to parties with. These people were once like you or I, it is the choices they made that eventually defined them as degenerates. 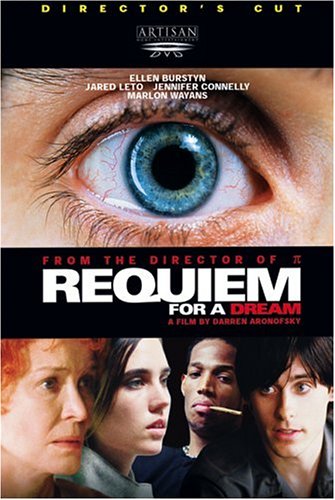