Let the Right One In or Twilight??? | Teen Ink

Let the Right One In or Twilight???

Favorite Quote:
"Life is like a box of chocolates...." (haha got to love Forest Gump)

I want to bring attention to a movie. The name? Let the Right One In.

Have you heard of it? Of course not! Its a swede film, subtitled in English. But before you disregard me as a crazy kid with taste in foreign films hear me out.

Twilight. Rated really really well. Popularity: really really high. What is it about Twilight that made it so popular? The forbidden fruit love? The romance? The action? Whatever the case it was a hit in America.

An earlier made vampire movie, Let the Right One In, was big in Sweden. It's about a 12 year old boy named Oskar. He is bullied constantly as he tries to appear normal to his mom and dad both divorced. To outlet his anger, Oskar collects news clippings of gory crimes. He often pretends he's the bullier as opposed to the victim.

One winter day a black car pulls up to the apartment near him. Outside steps a seemingly normal 12 year old girl. She is to live in the apartment next door with her older "relative". This girl holds a secret of being a vampire which is obvious early on to viewers.

Oskar meets the girl while outleting his anger on a tree. A bond begins to form between the two 12 year olds.

The movie about a bond so strong is better than the only twilight movie thus far. With unconditional love, murder, mystery, secrets, and suspense, Let the Right One In is a must see movie for all Twilight fans and vampire fans alike.

Actually, just watch it. Even in subs, the actors of Eli and Oskar are emotional and understandable. The mood is so deep, so loving, so twisted and morbid that you will talk about it for weeks to come. 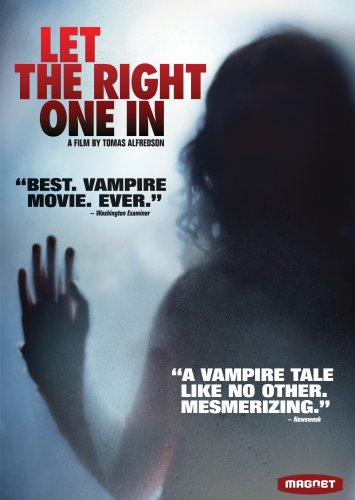 -"Wow that was sick... I thought you were going to show me something stupid..." DJ

-"You almost didn't need subtitles, you understand most of it...." DJ
Post a comment
Submit your own

Favorite Quote:
"Life is like a box of chocolates...." (haha got to love Forest Gump)

View profile
thanks for that! I shall look for an english version right away!
MissAtomic GOLD said...
on Feb. 25 2010 at 12:42 pm
MissAtomic GOLD, Sebastian, Florida
10 articles 5 photos 11 comments

View profile
Nice review. You should read the novel it's based on. It's called Let Me In.