The first piece of difficulty I had in writing a review of Zhang Yimou's House of Flying Daggers was choosing a genre. Compared to the similar and more well-known Crouching Tiger, Hidden Dragon, the film is centered on a romance, but manages quite well as an action film at the same time. Eventually, I did what I'm sure any of you would have done: gave up and hit Wikipedia, which gave me the term “Wuxia” to describe it. Like Crouching Tiger, Hidden Dragon and Hero (both of which saw wide U.S. release after opening in Asia), House of Flying Daggers showcases expert martial artists on opposite sides of a conflict in ancient China. That isn't, however, to say that it's a slugfest on the level of anything by Jackie Chan or Bruce Lee; in terms of character depth and cinematography, House of Flying Daggers far transcends those movies and most others like them.

The movie begins in a police station at the tail end of the Tang dynasty (around 850 A.D.), with Jin (Takeshi Kaneshiro) and Leo (Andy Lau) trying to figure out how they'll manage to kill the leader of the popular Flying Daggers, a shadowy band of rebels, in a mere ten days. Their search leads them to a brothel (the movie is PG-13, so no worries there) where they encounter a rebel agent, Mei (Zhang Ziyi). A blind dancer with remarkable skill in her chosen art, as well as that of fighting, Mei nearly dances her way to killing Leo in an impressive battle scene, but is eventually outdone by his superior weapons (sadly, swords trump long scarves) and sight.

Though torture and a confession seem inevitable for Mei, the tables are turned when Jin (disguised as a rebel sympathizer) rescues her from a police section. As they flee north in search of the Flying Daggers, dodging imperial patrols the whole way, a romance blossoms between the two, and in one moving scene Mei appraises Jin's fighting skills and youth solely through her sense of touch. To explain what happens beyond their flight would reveal too much, but suffice it to say that Mei is a powerful force in the life of more than one man and no one is who they seem to be.

Many characteristics separate House of Flying Daggers from the stereotype of the action flick with inept, cardboard-cutout villains and dry fight scenes. Though the ordinary soldiers of the empire clearly have nothing on Jin, Leo and Mei, they still know how to fight and show it through the way they work together to corner their foes (their performance in a forest of tall bamboo had me grinning and shaking my head). When Mei fights, you can feel the difficulties blindness presents her with, and every desperate grunt reveals the realistic trouble a 100-pound woman, practically a girl, should have fending off grown, muscular men with six-foot spears. I wanted to berate her enemies for daring to pick on someone Mei's size, even while she humiliated them in combat.

As in Crouching Tiger, several characters fight with abilities that are beyond natural, including leaps that hold them in the air for longer than gravity should permit and knives thrown like heat-seeking missiles, but the fights are still filmed in a way that seems entirely natural, making poor Bruce look like a klutz for following the laws of physics. The effects make every confrontation half combat and half dance, and the combination is unforgettable.

The use of color in the film is also notable. Ordinary scenes are made extraordinary by the colors that accompany them- from a panoply of bright colors in Mei's workplace to the brilliant green of the bamboo forest to the whitewashed ending brought about by an unintentional blizzard (in Ukraine, where the final scene was filmed, snow in October was nearly unheard of, but the director happily kept the unintentional change). Though the plot can be a bit thin at times (I'm admittedly not much for romance), the beauty of the visuals and the majesty of the soundtrack more than make up for it. I'd recommend this to anyone who loves movies, although more casual filmgoers may want to try Crouching Tiger first and move on to House of Flying Daggers and Hero (which I now await with great anticipation), yet another masterpiece of that marvelous genre, Wuxia. 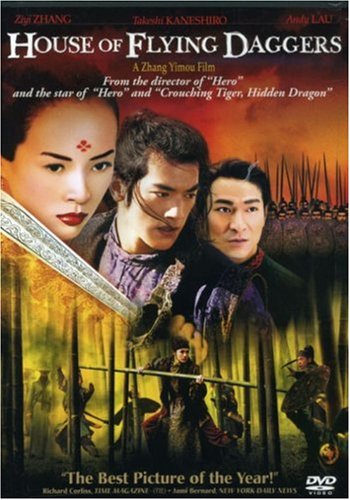