Ah, the vampire. Though the folkloric creature of darkness did at one point have some dignity, it later became the obsession of the typical 'emo' teenager thanks to works such as Interview With The Vampire and, of course, the penny-dreadful Twilight. Before the mainstream bastardization of vampires, though, they were a staple of the horror genre - all in thanks of the novel Dracula by Bram Stoker.

The story, as perhaps everyone knows thanks to pop culture, is of the vampire Count Dracula of Transylvania. After purchasing a house in England, the Count plans on having a new hunting ground for his dark deeds and living. Also, despite popular opinion, the 1931 adaption starring Bela Lugosi was actually NOT the first adaption of Stoker's novel to film. That title would belong to the classic and brilliant Nosferatu, directed by F.W Murnau of Germany. Because of that, it's hard to not try and compare the two films' retelling of Stoker's work. While Nosferatu nailed the gothic essence of the story, its depiction of Dracula was much different than Stoker's smooth, seductive creature.

Where this film succeeds is in character. We'll start with the classic, and by some the "definitive", portrayal of Dracula by Bela Lugosi. This performance is very well known for a reason, perhaps being Lugosi's best performance of all-time. His slow speech, deliberate hand gestures, and unnerving stare add to the illusion of the character, reinforcing the mystery behind him. The supporting cast is very well-fleshed out as well, especially Renfield. Where his portrayal in Nosferatu made him delve into self-parody, his portrayal by Dwight Frye is just excellent. The man starts as a real-estate agent and spirals into a raving madman, with his quintessential scene being when he's found under the boat of the murdered ship crew. He just stares at his 'rescue' with a huge, wacky grin all whilst giggling insanely.

Though I did admire the fleshed-out supporting cast, an attribute not found in Nosferatu, I didn't enjoy the silence of the film or how it delved into Hollywood territory at points. I say I didn't like the silence because the whole movie is devoid of music, relying only on sound effects and characters' voices. This is an incredibly difficult feat, though, and made the film just feel like an empty room at times. One could argue the empty roominess adds to the fear factor, I for one thought it made the film worse. The lack of music also makes the dialogue-less scenes drag, despite some great visuals.

As for the Hollywood territory, the film has a few characters that give in to the overacting that was famous in the '30's, perhaps because former actors were so used to having to overact for the silent pictures. The worst offender of this would have to be the actress who played Mina, who just plays the damsel-in-distress thing so over-the-top that it becomes annoying at parts.

Though the effects haven't aged well, the dark visuals and the performances of the main cast place Dracula quite high on the list of the best horror films ever made. They just don't make them like this anymore... 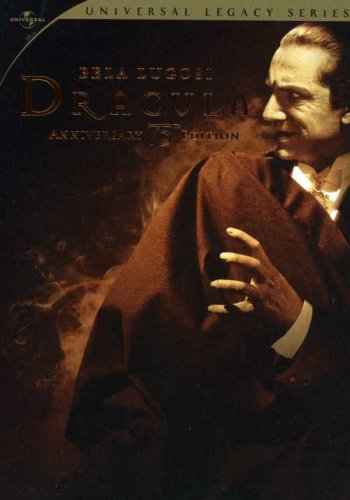