A father arrives home from a long journey, with him a gypsy boy. From the moment the lad enters the house he is disregarded and unloved by all—except the father and the sweet young mistress, Cathy. Heathcliff, the once-nameless boy, and Cathy become fast friends; playing daily with each other in a fantastical land of vivid color and make-believe, quickly becoming best of friends. As they gradually grow and mature, so does this deep friendship, eventually morphing into a powerful love that is impossible to be ignored. The father dies, leaving the family in despair and the orphan Heathcliff entirely in destitute… and yet the adoration between the two lovers only acclimates. One day, Cathy changes, becoming something foreign and entirely different than she whom Heathcliff has known his entire life—a woman. Cathy transforms from a grubby, ever-playful girl to a lacy, mascara-lidded lady. The stark contrast throws everyone in the household, and a distance is placed in the two lovers’ relationship that only grows. Eventually, Heathcliff becomes fed up with the whole situation, and leaves the little own in haste; taking the clothes on this back but forgetting one thing—his heart. Three years later, Heathcliff returns for what he has missed so dearly, but only to find his long lost love married to her social equal; the neighboring boy, Edgar. Cathy is happy with him, but only because she believed that Heathcliff will never come back for her. Heathcliff returns to Cathy, reclaiming his place in her heart as they relive the dusty passion that has been dormant for so many years. Right after the first time their lips catch, they both know there is no going back, though they know there can be no happy ending for their doomed romance.
Hauntingly poignant, classically passionate; Wuthering Heights is a timeless masterpiece that has the watcher clinging to every instant of it. A genuine cliffhanger. The movie opens with a funeral scene, showing a dashing young Edgar (Ian Oglivy) looking up dramatically into the eyes of Heathcliff (Timothy Dalton) who sits gallantly on his steed, standing on a hill, overlooking the funeral. And so the rivalry begins, or rather, ends. From that point on, the haunting depth and despair of this scene is constantly reiterated throughout the course of the movie, reoccurring continuously, popping up in the form of Heathcliff’s piercing eyes, manifesting itself through the drama of a lightning storm or the passion of a kiss. The tangible intensity of this opening scene is spread throughout the course of the entire movie, a constant reminder of the ending that is already known.
The constant fight for Cathy (Anna Calder-Marshall) is evident in various aspects and characters: most obviously betwixt Heathcliff and Edgar, a reoccurring event that happens repeatedly, both before and after the marriage of Edgar and Cathy. The grapple for Cathy’s love continues, though Heathcliff has already won her precious heart many times over. Though Heathcliff has the key to her heart, Edgar jealously guards the door, and poor Cathy is left to fend for herself—proving to be a most difficult task. Eventually Cathy belongs to no one—not even herself. Her body is owned by Edgar through marriage, her heart to Heathcliff by love… eventually the two forces rip her from polar opposites, quite literally contorting her to the point of death. Cathy is led to find she cannot please both her loves.
“Why did you do it?? You were the only thing that keep us apart!” The drama and pain clearly evident on Heathcliff’s face as his lips form these words… The acting in this show is phenomenal! The love shown in each caress, the blame and hatred fringing each punch (whether verbal or physical), the age and wisdom lacing each smile, or the crinkle of an eye… absolutely beautiful. Flawlessly done. This movie is a must see, a full five star show. Though a bit outdated in technology and cinematic effects, even by today’s standards the drama of the literary elements sprinkled nicely throughout the show are timeless. In all aspects, truly an excellent show. 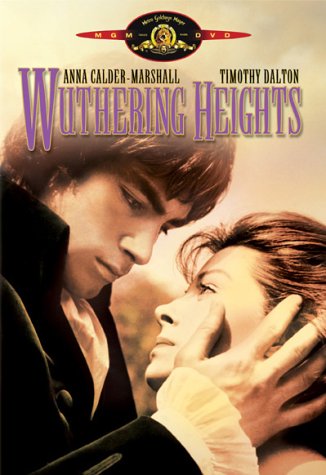