Unless you’re living under a rock, you’ve probably noticed that there is an increasing vampire trend going on right now. Everywhere you look there seems to be an “Edward Dazzles Me” or “Bite Me” shirt, or maybe even an “I Drive Like a Cullen” bumper sticker. Not to mention the merchandise, there are countless books, movies, and TV series; The Vampire Diaries (the novels and TV show), the Twilight Saga (novels and films), True Blood, and so many more. The biggest and most prominent, of course, is the Twilight Saga of Twilight, New Moon, Eclipse, and soon to be made into a movie, Breaking Dawn. It seems like you can’t go anywhere without hearing a Twilight-reference.

I am one of those many people who couldn’t stand to sit through another vampire movie. It’s been overdone and the craze is bound to die down soon, seeing that these trends never seem to last more than a couple of years. However, one day I was surfing YouTube when I came across a new movie trailer for what I thought would be the best thing since sliced bread; Vampires Suck.

It was a pun on everything Twilight, from the papercut scene in New Moon where Jasper attacks Bella (…why do I know these character names?) and to where Edward strips down in the sun to die. It would be a movie of everything my friends and I made fun of, and with better actors than the original films. I couldn’t wait.

Sitting in the theater watching the film, I quickly realized that all the funny parts of the film had been put into its many trailers. It seemed as if they were trying too hard to be too funny and most of it didn’t even make sense. While I got a good laugh out of parts like when the Jacob and Edward fans hit each other with shovels and Bella says to Edward “I know what you are… a Jonas Brother”, I still couldn’t help but thing what a terrible movie this was. Sure, I know they weren’t going for film-of-the-year, but surely they’d at least try to make it somewhat descent, and it just ended up being sad. Parts were just entirely inappropriate to the point that it wasn’t even funny. Leave that kind of humor to Saturday Night Live, vampire-comedy writers. They’ve mastered it… you, not so much.

Overall, if you have the chance to buy this movie, don’t waste your money. It is pretty much a waste of an hour and a half of your life. Watch the movie trailer if you want a laugh. 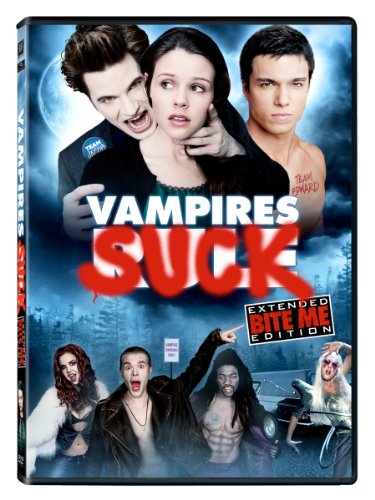 
Buy from Amazon Available on iTunes
The author's comments:
I was so pumped for this film and walked out so disappointed. I think they tried too hard, and it was almost sad.
Post a comment
Submit your own

u did NOT just call vampires suck a WASTE of money!!

i thought it was hilarious!!

Edward: * bites Bella in the neck*

Random fan comes up and hits Eddie with a shovel: "Team JAcob B***!"

the only parts i DIDNT like was the middle dirty scene and the small scene  where they made fun of Taylor Swift.

And when i went to see it in theatres people LAUGHED

judging from your reveiw I'd say your too mature to watch a spoof movie. SPOOF MOVIES R SUPPOSED TO BE STUPID AND FUNNY!