There's a wonderful irony to the fact that the current epicenter of social culture was created by a sociopath. Director David Fincher and screenwriter Aaron Sorkin magnify this paradox to unnerving effect in “The Social Network,” a film that sympathetically yet caustically captures the recent collision of technology and sociality.

The movie chronicles the birth of networking website Facebook and the lives of those involved, shifting between two story lines: the conception and growth of the site and the depositions of two lawsuits filed against creator Mark Zuckerberg (Jesse Eisenberg). Zuckerberg is an ambiguous antihero, a character we care about but don't necessarily root for. Instead, our empathy is vested in Zuckerberg's best friend, Eduardo Saverin (Andrew Garfield), Facebook's co-founder and initial investor.

The film's central conflict stems from Saverin's betrayal by Zuckerberg and self-serving entrepreneur Sean Parker (Justin Timberlake). Sorkin cleverly structures the plot so that we know from the beginning that Saverin sues his old pal, but we don't know why. In this sense, “The Social Network” is a thriller, a budding mystery that grips the audience with its emotional intensity and the actors' talent.

What's fascinating about the film is that, in terms of storytelling, it's simply the account of Facebook's creation. Fincher has no intentions of preaching or teaching. He doesn't criticize us for the way we've technologized the most personal aspects of our lives. If anything, he and Sorkin take a position of understanding; they don't blame us for sucking Facebook into our culture like a vacuum consuming dust. The focus is on the backstory, a very dark one indeed.

The mood of the film is consistently ominous, from the slick camera work to the dull color palette and the disturbingly simplistic electronic score by Nine Inch Nails' Trent Reznor and Atticus Ross. Harvard University, the locale of Facebook's origin, is depicted as a sleaze bucket. From the beginning, we're meant to believe that Facebook was concocted from a mix of ambition and misogyny; through a masterful opening blend of fast-talking, montage, and atmosphere, it's implied that the reason for the site's invention was Zuckerberg's post-breakup fury. We get the sneaking sense that he may have loved his ex-girlfriend, but he's too busy calling her out on the blogosphere to healthily express his wounded affection. For all his comprehension of human social sensibilities, he is inept when it comes to communicating.

What are Fincher and Sorkin trying to say about Zuckerberg and his networking brainchild? Wisely, they refrain from making judgments or exploiting themes. The film comes closest to a conclusion in its final shot, in which we see Facebook's architect, who drew up the blueprint for the social lives of 500 million people, sitting alone at his computer without a friend in the world. It's an image that defines the decade. 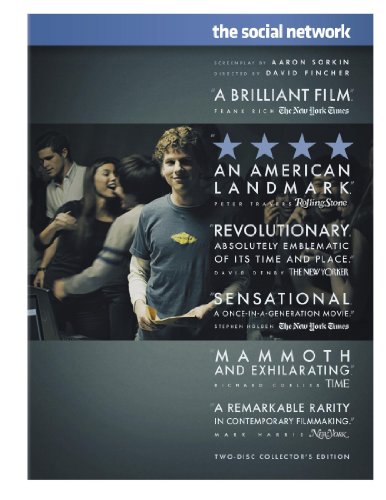