Phineas and Ferb: Across the 2nd Dimension | Teen Ink

Phineas and Ferb: Across the 2nd Dimension

*SPOILER ALERT!!! IF YOU DON'T WANT THE ENDING TO BE GIVEN AWAY, TURN BACK NOW!!!*

I’ve died, gone to heaven, and been back again. This movie is the most AWESOME, EPIC, TOTALLY WICKED, TOTALLY HEARTBREAKING movie on the entire planet!!

The movie begins on the morning of the 5th anniversary of the day Phineas and Ferb got Perry. They build a platypult and launch themselves towards the park, but are knocked off course by Perry’s new hover jet and end up at Dr. Doofenshmirtz’s place instead. They help him rebuild his Other-Dimension-Inator and take Perry (who instantly disguised himself upon his arrival at Dr. D’s after seeing the boys) with them to the second dimension.

While they’re there, they meet the Alternate Dr. D, who recognizes Perry in his pet mode and orders the Alternate Perry the “Platyborg” to attack him. When that does nothing to cause Perry to stand up and fight, he orders the Platyborg to attack the boys instead. Perry doesn’t hesitate to stand up and rescue them, but doing so forces him to reveal his double life as Agent P.

Upon learning the truth, Phineas loses it and starts getting after Perry for never telling them that he was a secret agent. He asks Perry if all they meant to him was a way to cover his identity, and whether or not they could trust him after this. (Later, however, he takes all of it back, saying that he was hurt and even if he was only using them as his cover, he was still their pet and he still meant a lot to him.)

The three of them escape and find the Alternate Phineas and Ferb, tell them about summer (which is illegal in the second dimension), and find the Resistance, led by Alternate Candace. Meanwhile, Perry goes to turn himself in to the Alternate Dr. D, who promises if he does, he won’t hurt the boys. Liar.

Upon learning of their beloved pet’s capture, Phineas and Ferb go back to rescue him, sacrificing their chance to go home. Just before the portal closes, however, Candace jumps through from the other side and ends up in the second dimension with them, so she tags along on the journey. They manage to save Perry, only to be re-captured and sent to their doom.

While dangling from a line of chains above a lava pit with Perry being the only thing keeping them from falling in, the Alternate Candace comes back to toss Phineas the remote that leads them back to their dimension. With Norm-Bots coming at them from every angle, Phineas tells Perry to let go of the cage that is keeping them from their deaths. When he doesn’t right away, Phineas says, “Perry, trust me!” Upon hearing this, Perry instantly lets go and they all begin to fall. However, just before they land in the lava, Phineas opens up a portal to another dimension (not their own). They travel through several different dimensions before returning to their own, and when they get back they discover that the Alternate Dr. D is invading their city.

When Major Monogram tells Perry to stop Alternate Dr. D and orders the boys home, Phineas refuses, saying to Perry, “Let’s go kick some robot jazzy.” However, Perry instead yanks off his collar, hands it to Phineas, salutes, and runs off.

Reluctantly, the boys return home, only to find Perry’s lair and, using his collar as a key, open a top secret message revealing that Perry needs their help. The message states that Perry knows they’ll know what to do because they are the only ones capable of creating things such as the rollercoaster, mechanical bulls, a baseball gun, etc. They don’t hesitate, and arrive in downtown Danville just in time to rescue Perry a second time.

After a long and tiring battle, Perry defeats the Platyborg, and in the end it’s the regular Dr. D who saves the day. However, Phineas and Ferb are now faced with a difficult choice: remember everything that happened and lose Perry forever, or have their minds erased and keep their beloved pet. They choose the latter. And, just before their minds are wiped, Isabella makes her move by kissing Phineas full on the mouth. Phineas instantly lights up and exclaims, “Isabella!” and tries to stop Major Monogram, but it’s too late.

The movie ends with Perry downloading photos he’d taken of him and the boys during their adventure and smiling to himself. The credits are accompanied by the music video “Kick It Up a Notch”, featuring Slash.

Friendship, love, trust, and betrayal outline every inch of this movie event of the summer. It will make you laugh, cry, and scream in both excitement for the action and fear for the character’s lives as their friendship is tested, their lives are put on the line, and they discover that some things are definitely worth fighting for. 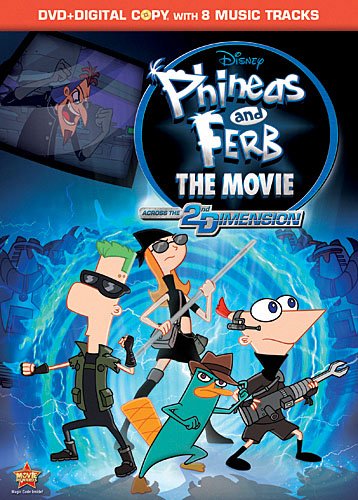 
Buy from Amazon Available on iTunes
The author's comments:
I saw the premiere of the movie last night, August 5, and I ran around the house screaming my head off during every commercial break. If you love Phineas and Ferb, you'll DIE when you see this movie. SPOILER ALERT!!! I cover the entire story!!! If you don't want the ending to be given away, turn back now!!
Post a comment
Submit your own

View profile
Thanks so much! This has become my #1 favorite movie! I just bought the DVD w/ the extra DVD and bonus episodes! :D
ThePeaceDaisy BRONZE said...
on Aug. 23 2011 at 12:25 am
ThePeaceDaisy BRONZE, Albany, New York
4 articles 5 photos 223 comments

View profile
I am totally in LOVE with the movie! and I loved how Isabella kissed Phineas, but I wish Carl hadn't shot the Amnesia Ray right then! Anyways, great review!