After last years big success with High School Musical 2, director Kenny Ortega and the cast decided to give the series one last go with the final installment for the original cast in High School Musical 3: Senior Year. Because HSM2 drew in over 17.2 million viewers with its premiere, the third movie has made it to the big screen and is now showing in theaters everywhere across the country. Just after its first weekend, the film brought $42 million, making it the top at the box office.

Although some may call it a movie just for children, they would be surprised to know that there were few souls under the age of 15 at the screening I went to. So why do people enjoy these movies so much? Aside from the catchy songs, creative dance moves, and up and coming actors, the chemistry of the cast is what sets these movies apart from other movies. After starting out in 2006 not knowing how the world would react to High School Musical and then reuniting for HSM2 last fall, the cast really did graduate in the third film in more ways than one. “We've had such fun doing these movies…. It's like working with your best friends all the time. It's definitely something that's tough to leave and say goodbye to,” said cast member Ashley Tisdale.

Senior Year shows all of the things that seniors have to go through. Be it deciding on which college is right for you, prom, graduation, deciding what to study in college or even deciding what lies ahead for your current relationship, HSM3 shows it. With 10 new original songs, the soundtrack might not have the best music ever, but it is definately a step up from the last two.

After being watched and review by Entertainment Weekly critics, the movie recieved a B on it's grading scale, so it's okay to give the movie a shot. 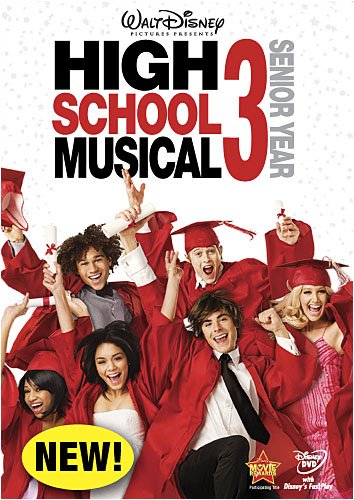