Over the last decade, Taylor Swift has become a household name, winning hundreds of awards, topping the charts, and selling out stadiums around the world. Throughout her career, she’s explored a variety of genres, dabbling from country to pop and now indie. On December 11th, 2020, Swift astonished the world when she released her second surprise album of the year, “Evermore.” Like her previous album “Folklore,” which debuted in July, Taylor announced the release just 12 hours prior, something unheard of in an industry where artists spend months promoting new music.

“Evermore” is more imaginative and magical than it’s predecessor, which is evident from the album’s first listen. In “Folklore,” we saw the shift from pop to indie-folk, and Swift stayed true to this soft, mystical tone in “Evermore”, a cohesive masterpiece that flawlessly ties together the stories of first loves, heartbreak, and newfound revelations.

Her lead single “Willow” takes the listener on a trip through the essence of their imagination, the banjo and harmonies reminiscent of a nighttime stroll through the woods. “Ivy,” although much more lyrically complex, mirrors this same fairytale sound, showcasing her versatile vocals.

Of course, it wouldn’t be a Taylor Swift album without her despairing love songs, and “Evermore” gives the fans a plethora of heartbreaking anthems to scream along to in the car. “Champagne Problems” shows off her renowned songwriting skills, the metaphoric lyrics transforming the song into a dimensional story of failed love for fans to uncover. On the contrary, “Gold Rush” and “Long Story Short’ are a rush of serotonin, an enjoyable hiatus from the rest of the heartfelt album as she sings about moving on from past lover, his “twinkling eyes like sinking ships.”

Swift collaborates with country music group HAIM in the gripping murder mystery, “No Body, No Crime,” which is a shocking twist to the album, the classic guitar and country tones taking us back in time to the early days of Swift. Songs “Evermore” and “Coney Island” feature The National and Bon Iver, only further proof of how effortlessly Swift’s voice blends with other similar artists.

I was blown away listening to Swift’s storytelling and soft melodies in “Folklore” last July, and while I didn’t think anything could ever top it, I was utterly consumed by the phenomenal fifteen tracks on “Evermore.” Taylor Swift is by far one of the most talented lyricists the music world has ever seen, and in this incredibly profound album, she explores a new sound perfect for her alto voice, while also crafting stories like no other. The raw emotion, authenticity, and truest feelings are something that we don’t find often in music, but “Evermore” manages to perfectly capture it all. 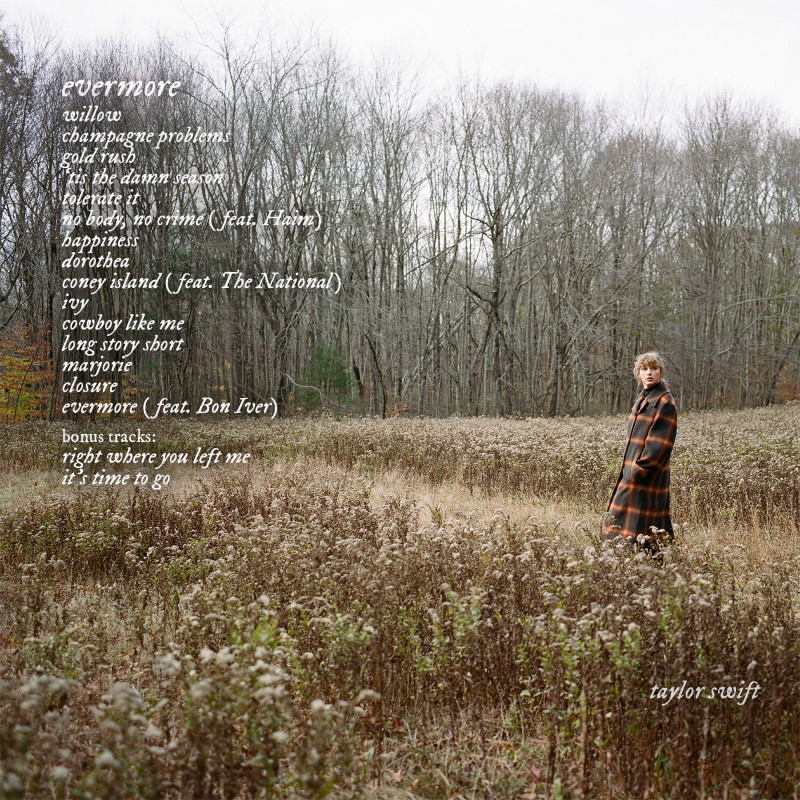 As a huge fan of Taylor Swift over the last decade, I immediately fell in love with her 9th studio album 'Evermore.' I wrote this review with the hopes that more people would delve into Swift's music and experience the magic and joy that she felt during her first listen.