David Archuleta's new album, “Christmas from the Heart,” is filled with entrancing, traditional Christmas songs as well as captivating carols in many languages.

When I first saw the album art, I didn't love it. The cover is very bland – a white background and a picture of Archuleta with some colored snowflakes. The title is written in calligraphy. It wasn't original or impressive, but after I listened to the first few songs, my opinion changed completely.

The album opens with a beautiful rendition of “Joy to the World.” The first 30 seconds aren't anything special but at the end, Archuleta kicks out jaw-dropping riffs and amazing high notes. His mature voice is well-suited to sing these carols. I was hooked.

This album features many traditional carols as well as
a few contemporary and foreign ones. Songs like “Have Yourself a Merry Little Christmas” (a duet with Charice Pempengco), “Melodies of Christmas,” and “I'll Be Home for ­Christmas” offer a unique and upbeat spin to the album. “Riu Riu Chiu” and “Pat-a-pan” blend in perfectly with the more traditional carols to create an elegant and diverse mix of Christmas tunes.

Listening to Archuleta sing favorites like “O Holy Night” and “Silent Night” made the butterflies in my stomach stir and gave my whole body chills of joy. His voice brings these normally flat carols to life and makes you want to play them again and again.

“Christmas from the Heart” is the perfect way to celebrate the holiday season. It's a great gift for music lovers of any age. Archuleta's new CD will have you ready to rock around the Christmas tree and sing along with this new spin on traditional holiday music. 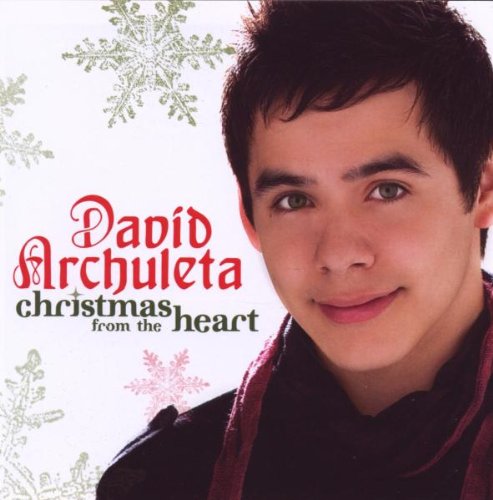 Hope Udarbe said...
on Apr. 6 2011 at 4:25 pm
Hope Udarbe, Westminster, Colorado
0 articles 0 photos 25 comments
View profile
We all know David Archuleta and Justin Bieber are great so thats all I can say
cathyrm said...
on Nov. 13 2009 at 8:38 pm
Thanks for the nice article about David's "Christmas From The Heart" cd. I love every song on this beautiful cd. He made the traditional songs sound new again and songs like "Pat A Pan" & "Riu Riu Chiu" are wonderful. I have listened to this cd several times now and each time I listen to it there are more things I like about it. "Melodies of Christmas" was co-written by David and has such a joyous pop feel to it. David Archuleta is truly one of the best young artists out today!
hollyre said...
on Nov. 11 2009 at 12:15 pm
Thank you for the article. Even though most of the songs on Christmas from the Heart are traditional David puts a new spin on them and they become totally new. He shows a soul-vibe in several of the songs that perfectly fits his voice. Listen more than once to this album to truly appreciate the artistry of David Archuleta.
Jillian SILVER said...
on Nov. 11 2009 at 5:58 am
Jillian SILVER, East Grand Rapids, Michigan
5 articles 0 photos 5 comments
View profile
Sorry about the title, guys. When I submitted it, TeenInk added the extra "By David Archuleta" at the end making it repetitive. My apologies. (:
archie17 said...
on Nov. 10 2009 at 10:27 pm
Thanks for posting this. David's Christmas CD is nothing short of beautiful, and I wish the world could find out about it. They'd love it!
angelofdja said...
on Nov. 10 2009 at 8:06 pm
David Archuleta continues to grow both as a performer and a song writer. He has shown a level of class and professionalism that I truly respect. It's been a blast watching his career since the Star Search days! What a VOICE!
Gracie said...
on Nov. 10 2009 at 7:56 pm
Nice review. I have listened to the album on repeat now. I think it's great. I wish though that he wasn't sick when he was recording some of the songs. But that's what I admire about David, he makes the best of what he had at that time. I love Joy to The World, O Come All Ye Faithful, What Child Is This, Ave Maria, and of course I absolutely adore Pat a Pan and Riu Riu Chiu. I think those are going to be incredible when he performs them live. He is so amazing live. I wish producers could create David's songs so that you get he same high as listening to him live. Anyway, glad he is doing a Christmas concert. I am going!
Jillian SILVER said...
on Nov. 10 2009 at 7:29 pm
Jillian SILVER, East Grand Rapids, Michigan
5 articles 0 photos 5 comments
View profile
That was a wonderful critique of the CD. Thanks for reading! It's great to see other FODers on TeenInk. (:
Jillian SILVER said...
on Nov. 10 2009 at 7:28 pm
Jillian SILVER, East Grand Rapids, Michigan
5 articles 0 photos 5 comments
View profile
I'm glad you could relate to my review! It's a great cd! (:
lyrix said...
on Nov. 10 2009 at 7:08 pm
Jillian- I really enjoyed reading your article.

Thank you!!
violet4ever said...
on Nov. 9 2009 at 10:54 am
Thanks for the super and honest review! I know a few fans were hoping for David's 2nd album to be pop and were disappointed it was a Christmas album. If you are one of those fans, you have to hear this album. It is pure Archuleta - traditional Christmas with inventive arrangements and David's pop, soul and gospel touches. Check it out at last.fm. Even if you think you could never love a Christmas album, I think you will change your mind when you hear this one. And if you are young and depend on your parents for concerts, put the album on in your house. You may find it a bit easier to convince your parents next time you want to see David in concert. :)
violet4ever said...
on Nov. 9 2009 at 2:07 am
Christmas albums sell less than pop albums. David did very well for a Christmas album released pre-Halloween. Few stores will even put out Christmas albums until Halloween is over. It sold close to 17.000 the first week and the following two weeks were over 7000 copies each, for a total so far of 31,000 in just the US. The album is also for sale in Canada, UK, France, Germany, Philippines, Singapore, Malaysia, Indonesia, Taiwan and Japan. Also, though David has 250,000 Twitter followers, those followers are worldwide and David does not promote himself. The album was #5 on the Billboard Holiday chart this week. It's doing fine. And it will do better when it gets promotion. BTW - you can listen to full tracks at last.fm - check it out! And if you like it, buy yourself a copy or ask for it as a gift, and if you can, give it as a gift too. I love the album.
Kaitie said...
on Nov. 9 2009 at 1:15 am
Oh, and David has actually sold over 31,000 copies of the album as of last week. Not sure where you got your 16,000.
Kaitie said...
on Nov. 9 2009 at 12:37 am
Hi JamieWonders,

Well, it is still pretty early for a lot of people to be buying Christmas music, and I wouldn't think it's a good idea to use number of Twitter followers as a sales-predictive measuring stick for any musician. As Christmas nears, we'll see how the album sells. David so far has done no promotion. I hope the album sells well because it is a great Christmas album.