With a distorted, bass-heavy sound punctuated by 8-bit-style synthesizer, stirring string interludes, and Matthew Bellamy's evocative falsetto, “Black Holes and Revelations” stands out as an intricate and philosophical album.

Drawing on their English roots, Muse gives an interesting mash of musical styles. Prog rock, electronica, and metal all make distinct showings, but the variety from song to song makes it even tougher to pin a single genre to this band.

While some previous songs gave Bellamy's voice a nasal, whiny tone, this album very skillfully avoids that. His singing is used sparingly, and to great effect. This is showcased best in “Take a Bow,” where the synth and strings make an interesting mesh between space rock and classical. The jarring contrast created when the heavy, wailing guitar is added evokes a feeling of destruction of something beautiful. Bellamy enters, calmly declaring to an unnamed figure that he or she will burn in hell, and his high singing sounds like a church choir. As the song progresses, he grows higher, and more desperate, mirroring the desperation society feels as democracy gradual dissolves into oligarchy.

“Knights of Cydonia” also deserves credit as a unique song. Avoiding the typical synth-focused sound, this song uses a whammy heavy guitar, with melodies that invoke a feeling somewhere between a space opera, a Western, and a cavalry charge. The background horn and singing add subtle layers of complexity, with pensive and provocative lyrics.

“Soldier's Poem,” the shortest piece on the album, shouldn't be considered brief, but rather concise. The sparse kick drum back beat and acoustic guitar is unlike any of Muse's previous work. The topical and controversial lyrics are coupled with Bellamy's excellent delivery, and well-placed harmonies invoke a melancholy tone. The song describes the Christ-like sacrifice soldiers make for their nation, an especially potent message considering our current military situation. This piece is the crown jewel of Muse's album. With the line “And do you think you deserve your freedom?/No, I don't think you do,” they give today's society a swift kick to the gut, blaming thinly veiled imperialism and a vapid public for our current problems, and comparing America and England to pre-WWII Germany.

While I've given my opinions on a few songs here, I've barely scratched the surface. The stirring love songs “Starlight” and “Invincible,” as well as the metallic sounding “Supermassive Black Hole,” are also excellent. In short, if you're looking for a provocative album of flashy, complicated progressive rock with substance to match its style, check out this album. 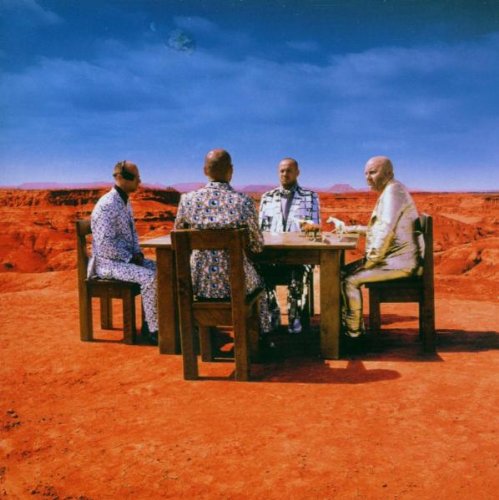 
Buy from Amazon Available on iTunes
The author's comments:
I wanted to try and dissect some of my favorite music, and look at some of the strikingly complex devices that music writing in general has. This is what came out of it.
Post a comment
Submit your own

View profile
I posted previously to say that I had written originally "Christ-like, but ultimately useless" but the ultimately useless part had been omitted. I was describing how the song was jaded and frustrated with the war, rather than my own opinions, and I felt frustrated that that part was omitted. I hope that this one shows up, because the others haven't, but we'll see. Well, we'll see or I'll, by not seeing, understand.
Markus SILVER said...
on Apr. 25 2011 at 7:15 pm
Markus SILVER, Boulder, Colorado
6 articles 0 photos 20 comments

View profile
Well I can see that one, and (hopefully) this one, but I posted a previous comment, so yeah. Maybe they just didn't allow it to be posted.
Markus SILVER said...
on Apr. 18 2011 at 11:13 am
Markus SILVER, Boulder, Colorado
6 articles 0 photos 20 comments

View profile
Hey, can someone tell me why I can't see any of the comments posted here? It's a bit wierd.