If you're into Latino rap and don't have this CD, you should go out and buy it. Roberto Flores - Lil' Rob - has some great songs on this album with lyrics about what he's done or what he is up to. He comes from San Diego, and some of his songs are about that city. He raps alone and sometimes with other Latino rappers.

Lil' Rob has said that his fans like him for who he is and what he raps about, and he does stand out. Many rappers rap about being a player, but Lil' Rob doesn't because he isn't one. While other rappers rhyme about bling-bling and rings, he does not. And, while a lot of rappers talk about cars they don't have, he raps about the ones he has. He says he is just a regular homeboy, and that is what he raps about!

Lil' Rob is really the greatest rapper ever. He was only 16 when he started; when his homies heard him they told him to go somewhere to get heard. Since then, his fame has spread. He says that "his fans will appreciate his new sounds," and he just got a new deal with Upstairs Records.

Although some of Lil' Rob's songs might contain content that parents don't like their children listening to, his songs will make you get up and dance. His beats are "tight" and memorable. He sold 90,000 copies of "Natural High/ High Till I Die" and is a vato (East L.A. slang for homeboy) to listen to.

I really recommend you get "The Album" - you don't want to be only person without it! Lil' Rob is one of the best Latino rappers 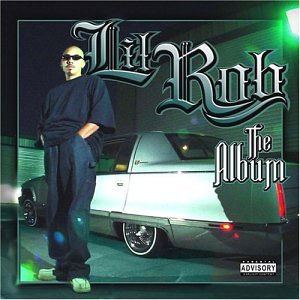