Atypical Will Leave You in an Atypical Amount of Tears

"Atypical,” a Peabody Award-nominated, critically acclaimed TV series from Sony Pictures TV, will hit you right in the heart. This quirky, slightly offbeat comedy-drama Netflix TV show follows Sam Gardner (Keir Gilchrist), a teenage boy with autism who is looking for romance. He faces obstacles in his day-to-day life that are unknown to those who don’t have experience with autism. Robia Rashid, the creator of this masterpiece, gives a window into how autism affects people and their families. "Atypical" is a show that will put you right there with Sam and his family on the rollercoaster ride of self-discovery they each experience.

The first episode opens with Sam fidgeting with a rubber band, saying, “I’m a weirdo. That’s what everyone says. Sometimes, I don’t know what people mean when they say things, and that can make me feel alone even when there are other people in the room. And all I can do is sit and twiddle, which is what I call my self-stimulatory behavior, when I flick a pencil against a rubber band at a certain frequency and think about all the things that I could never do, like research penguins in Antarctica or have a girlfriend…” It is revealed that Sam is talking to his therapist, Julia Sasaki (Amy Okuda), whom he is very fond of, as he ruminates about living with autism. Julia is the one who puts the idea into his head that it is possible for a person on the spectrum to date.

On the bus ride home from therapy, Sam is made uncomfortable by simple things that neurotypicals (people without mental disorders) don’t notice, such as the bus seat. We then meet Sam’s overprotective mom (Jennifer Jason Leigh), who is droning on about something, only to get the sarcastic response of, “Wow. That is a great story, Mom,” from Sam’s feisty yet lovable sister, Casey. (Brigette Lundy-Paine) In response to this, Sam’s tough dad, Doug (Michael Rapaport) quickly but gently condemns his daughter's disrespect. From family meals to time spent at school, Sam’s closeness to and dependency on his family is revealed. Sam dryly states that his sister does not let anyone bully him unless it’s her. Although she does fight off all his bullies, they still have their typical sibling dynamic including many quarrels. Sam’s life is clearly different from those of neurotypical’s. He goes to a therapist, he is obsessed with Antarctic penguins, and he doesn’t pick up on social cues in the same way neurotypicals do. Regardless, he still lives his life as a semi-typical teen: he works a technology store named Techtropolis with his friend Zahid, he desperately wants to fit in, and as most teen boys do, he yearns for a girlfriend.

"Atypical" would not be the masterpiece it is without its incredible cast. From Keir Gilchrist’s mannerisms to his monotones, he fully embodies the reality of what it is like to be autistic. As an obsessively involved mom seeking an escape, Jennifer Jason Leigh was perfectly dislikable and pitiful simultaneously. The controversial Michael Rapaport brought his natural intensity to his role as Doug. Brigette Lundy-Paine stole every scene they were in, playing a character with the most layers to her.  Brigette’s performance was a true tour-de-force. They managed to show every side of Casey, from her tough skin to the pains and struggles she faces deeper within. Characters who pop up later in the series include Izzie (Fivel Stewart) and Paige (Jenna Boyd). They bring their intrigue and quirks everywhere they go. Stewart and Boyd each send the message of girl power by fully portraying the strong and assertive female characters of Izzie and Paige.

"Atypical" was beautifully written and executed, but there are some unfortunate cons. The show received a significant amount of backlash regarding the lack of autistic actors and representation. With close to no autistic actors included until the second season, this TV series has been regarded as a disappointment for the autistic community.

As "Atypical" had its flaws, so did its characters, teaching many important lessons as they (like the show as more autistic actors were incorporated) developed. Penguins, which Sam is obsessed with, represent more than a simple obsession which is a side effect of Sam’s autism. Penguins represent endurance and adaptation, and because they have adapted to fly through the water instead of the sky, they symbolize determination and change. All the characters of the TV series learn to adapt to new and sometimes terrifying situations. Although these were not Rashid’s intentions when creating "Atypical", as we are over a year into the global pandemic, it’s hard not to apply the lessons from this show to our own lives during the pandemic. We have been through a year filled with uncertainty and isolation, but similar to the "Atypical" characters, also growth and development.

This TV series is important for people of all ages to see. "Atypical" is rated TV-14 for brief sexual and drug content, but I would recommend it to anyone over the age of 11 because of the eye-opening message. Watching "Atypical" will help leap past societal stereotypes surrounding autism and will help people better understand that people with autism are people too. A serious show wrestling difficult topics buoyed by comedy and hope, “Atypical” is not only worth watching, but is extremely important to watch. If you are brave enough to join Sam’s emotional journey, be prepared to laugh, sob, smile, and everything in between. 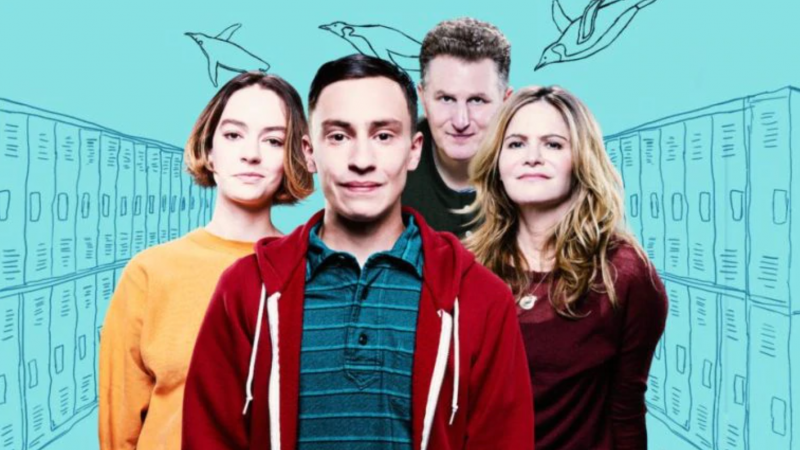 When I watched "Atypical" for the first time, I instantly fell in love with the quirky, relatable, and complex characters. I hope you do too!