When I first heard of the BBC show ‘Doctor Who’ I was unsure of what to expect. Just newly released on a wider scale on American television, I had never heard of the program before. I found the concept of the man called simply ’The Doctor’ to be odd. A man-who you find out is an alien- who travels around time in space in a blue box that’s bigger on the inside then it is on the outside is the gist of it.

The first episode I watched was actually one of the last in series 5 “Vincent and the Doctor”. In this episode I am introduced to a rather odd main character, that of ‘The Doctor’, a young looking man with suspenders and a bowtie which he frequently refers to it as being “cool”. The Doctor as I find out over time is over nine hundred years old and has the ability of regeneration. A clever ploy on behalf of the writers of Doctor Who, that have been able to keep the show alive since the sixties. When he is about to die he regenerates into another body, which, in our world, means another actor takes on the role. I am also introduced to a girl named Amy Pond, a companion of The Doctor. She is a fiery tempered red head who is in the best of terms, “spunky”. I later find that the Doctor knew Amy when she was a young girl. He dropped out of the sky in his blue box called the TARDIS in her yard one night while she was praying to Santa to send a police man to fix the “scary crack in her wall” (that‘s a mouthful!). A crack that is actually a crack in time and space. The Doctor later returns after Amy is grown to have her accompany him as his companion and together their adventures inside the blue box begin.

Together as the pair walk through a common day art museum in France their loving and slightly odd relationship is apparent to me. The actors portraying the two, that of Matt Smith and Karen Gillian, have the best chemistry I’ve ever seen on television. As the show goes on, The Doctor and Amy fight and bicker, joke and laugh, and there are times-the times I enjoy watching most-when the goofy doctor becomes as wise as his age and speaks wisdom to Amy.

The show has other regular characters in it, including long time veteran of the show, River Song. River Song is about as mysterious as the Doctor himself. Played by Alex Kingston, a beautiful curly haired blonde, she portrays a sensual love interest of the Doctor. She is very coy and very intelligent. Apparently she is from the future, knowing the doctor from then. There is also Rory Williams, who is sort of a loose cannon with a continuous habit of being killed off but coming back to life in one way or another. He is a wimpy but devoted guy, especially as far as Amy, his wife, is concerned. In one episode it is said he waited two thousand years for Amy, protecting her as the last centurion of Rome.

Though the concepts of this show are hard to follow at times, it is a different show in the best of ways. Some episodes are hit and miss, but most are great fun and enjoyable. I have great fun watching ‘The Doctor’ and have great hopes for the new shows to come. 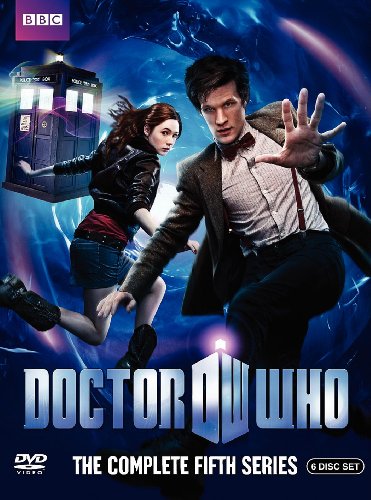 Favorite Quote:
“Funny how a single word can change everything in your life."
"It is not funny at all. Steel is power. Money is power. But of all the things in all the worlds, words are power.”

View profile
I love Doctor Who, but the Twelfth Doctor... I just don't like him. For anyone who's seen the second season with 12, does he get less annoying? Love 9, 10, and 11, though: "No, he isn't. I speak Horse. He's called Susan, and he wants you to respect his life choices!"
ThePeterPerspective BRONZE said...
on Jan. 25 2015 at 4:04 pm
ThePeterPerspective BRONZE, Waterbury, Connecticut
2 articles 0 photos 1 comment
View profile
I feel like you shouldn't have started with Matt as your first doctor, let alone 'Vincent and the Doctor' as your first episode. When watching the earlier seasons, it tends to ruin expectations. The acting can be bad, and the special effects cheesy (Although this is one reason I love DW). Despite how Matt's regeneration sparked a reboot amongst the writers and actors, it is the next chapter of an already on going book. Now I'm not saying watch the series from 1966, but you should not keep going from that episode foward. The satisfaction of going from Christopher to Peter is part of the fun of watching the series. But hey. I'm just an American with an obsession, what do I know?
SophieFloph PLATINUM said...
on Jan. 15 2015 at 10:33 am
SophieFloph PLATINUM, Seattle, Washington
21 articles 3 photos 37 comments

Favorite Quote:
"Her stomach did a revengeful flop."

View profile
Maybe if I started watching with Matt Smith as the doctor he would have been fine but it's hard to accept the major changes Moffat brought to the show. I respect other peoples' opinions and I don't want to be a hater because I still really enjoy the show. I haven't watched season 8 and I hope it's good.
catty98e GOLD said...
on Jan. 14 2015 at 3:41 pm
catty98e GOLD, Spring HIll, Kansas
12 articles 0 photos 42 comments

Favorite Quote:
"I'm a freak, I've been a freak my whole life. I just have to live with it, you know. I'm just one of those people. I'm not going to change the way I think or the way I feel to conform to anything."
-John Winston Lennon (1940-1980)

Favorite Quote:
"I'm a freak, I've been a freak my whole life. I just have to live with it, you know. I'm just one of those people. I'm not going to change the way I think or the way I feel to conform to anything."
-John Winston Lennon (1940-1980)

View profile
I love Doctor Who. Have watched it from Chris Eccleston all the way through. Still want to watch the old series though. Great review.
SophieFloph PLATINUM said...
on Jan. 10 2015 at 6:49 pm
SophieFloph PLATINUM, Seattle, Washington
21 articles 3 photos 37 comments

Favorite Quote:
"Her stomach did a revengeful flop."

View profile
I love the first four seasons of the show! I hate Matt Smith though, so that's what's going on with my opinion of seasons 5-7.
dustyrebekah said...
on Nov. 3 2014 at 2:36 pm
I mean the show is amazing!