Favorite Quote:
We are all in the gutter, but some of us are looking at the stars.
-Oscar Wilde

Starring Benedict Cumberbatch as Sherlock Holmes and Martin Freeman as John Watson, season two of the BBC drama “Sherlock” premiers May 6, at 9 PM, on PBS Masterpiece Theatre. As a British TV junkie and avid Sherlock fan, I watched the three new 90-minute episodes back in January, when they first aired in the UK. With all the objectivity I can muster, Sherlock is a brilliant mash-up of Sir Arthur Conan Doyle’s classic detective novels and the modern savvy of writers Steven Moffat and Mark Gatiss.

Since the first episode of season one, “A Study in Pink,” aired in 2010, Sherlock has amassed a significant collection of crazed devotees as well as positive reviews. In essence, it’s a contemporary update and conglomeration of all of Doyle’s works. Unlike a new version of Austen or Dickens, “Sherlock” is fresh and invigorating. It’s no longer “Holmes and Watson,” but “John and Sherlock” who take up a flat together at 221B Baker Street after a chance meeting and solve crimes around London. Sherlock is characterized not as a stiff but polite gentleman, but rather as a “high-functioning sociopath”—an extremely intelligent but emotionally callous sleuth who delights in having the last word in a conversation and proving his superiority to everyone else. He’s a “consulting detective” who the police go to when they are incapable of solving a crime. John, on the other hand, is a disillusioned veteran of the Afghanistan war who struggles to understand Sherlock, but sees him as a fascinating man whose life could be worth something to society.

Watching “Sherlock” is akin to watching a horror film laced with comedy. It’s funny and witty but absolutely frightening. For instance, in the first episode of season two, Sherlock is talking to an inmate and deciding whether or not to take his case. When the inmate pleads with him, saying, “Please, Mr. Holmes. Without you, I’ll get hung for this,” Sherlock smirks and replies, “No, no, not at all…Hanged, yes.” In addition to correcting the grammar of an inmate with little education and an Eliza Doolittle accent, Sherlock is even derisive towards his friends John and Detective Inspector Lestrade. A notable remark of his is “Dear God. What is it like in your funny little brains. It must be so boring.” In the midst of all this humor, the action never stops, as disfigured corpses are uncovered, chilling clues are found, and dangerous criminals elude capture.

I think the most brilliant aspect of this modern-day “Sherlock” is the way that John and Sherlock’s friendship is depicted. Whereas Doyle’s works focused almost exclusively on the individual cases, Moffat and Gatiss have developed the relationship between John and Sherlock. After their first meeting and the first crime they solve together, Sherlock and John share a flat and develop a “partnership”. Gradually, they become best friends, though their relationship consists of John resembling an exasperated father and Sherlock a petulant but precocious child. By the end of season two, however, I was moved to tears by the friendship they developed despite John’s uncertainty and Sherlock’s purely analytical, emotionless mind. In a rare moment of contemplation, Sherlock says to John, “I don’t have friends. I just have one.” And John says to Sherlock, “There were times when I didn’t even think you were human, but let me tell you this. You were the best man, the most human…human being I’ve ever known. I was so alone, and I owe you so much.”

If you like detective fiction or are looking for an alternative to reality TV, make sure to tune in on May 6, or check out the Masterpiece Theatre webpage to watch online. 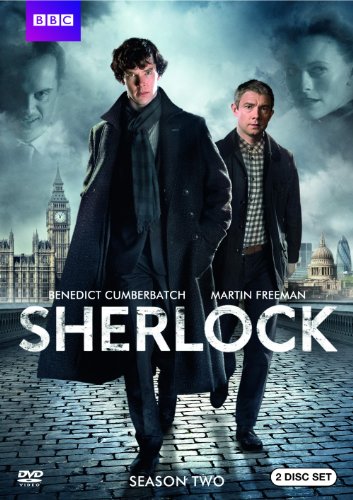 
Buy from Amazon Available on iTunes
The author's comments:
I give this brilliant revival of classic detective fiction a solid 9.5/10.
Post a comment
Submit your own