Make It or Break It | Teen Ink

Make It or Break It

“Make It or Break It” is an unrealistic, melodramatic television series that recently made its final dismount on ABC Family. It captures the unfamiliar lives of competitive teen gymnasts whose main goal is to be known as the girl with the gold medal around her neck while poised on the Olympic podium after being crowned the sport’s highest honor-1st place all-around. However, this does not seem to be their top priority when a number of avoidable cliché problems stand in their way, including fickle, forbidden romantic relationships, outrageous and unfaithful friendships, and so forth.

This gymnastics-based teenage soap opera takes place at the notorious Rocky Gymnastics Training Center, or “the Rock,” in Boulder, Colorado. The show depicts the gymnastics world and its contenders as catty, conceited, and consumed in their stereotypical feminine lives. As a competitive gymnast myself, I feel deeply offended by such portrayals.

Payson Keeler, played by Ayla Kell, is the dedicated “goody-goody” of the group who will bend over backwards to turn her dream into a reality. Despite her determination, she remains uptight and doesn’t comprehend the meaning of “fun.” Cassie Scerbo, otherwise known as the infamous Lauren Tanner, takes on the role of a spoiled brat who is known for more than just her superior abilities on the balance beam. Josie Loren plays the much-loved Kaylie Cruz who must cope with her parents’ divorce, the hardships associated with fame, and a deadly eating disorder. Although they all possess distinct qualities, they face endless “boy drama.” Carter Anderson (Zachary Burr Abel), Austin Tucker (Zane Holtz), and Max Spencer (Joshua Bowman) are merely a few of the boys causing excessive trouble in the girls’ lives regardless of the gym’s strict policy that prohibits romantic affairs.

The gymnastics executed on “Make It of Break It” does not meet the expectations of competitive gymnastics. At their elite level, they should be performing more complex skills and learning more difficult dismounts. Instead, the gymnasts are doing basic elements, like a simple back tuck, or back flip, off of the uneven bars. Also, the show is extremely predictable in the sense that conflicts are routinely resolved in a Disney-like fashion. For instance, specialists informed Payson that she would never be able to do gymnasts again due to her life-changing back injury. Soon enough, another medical expert miraculously claimed he could fix her back in a single surgery.

On the other hand, there are some aspects of “Make It or Break It” that will impress the audience. The music selections featured on the show directly correlate to the reckless situations the girls are in. Also, the storyline revolves around one motivational moral-you can accomplish anything as long as you set your mind to it and never give up.

After watching the series that was cancelled after three brief seasons, viewers can begin to analyze why it tumbled down in the ratings. It takes the lives of normal female teenage gymnasts and twists them into devious, egotistical drama queens while giving the inspirational gymnastics world a poor reputation. As one of the judges of “Make It or Break It,” I score this television show a 4 out of 10. 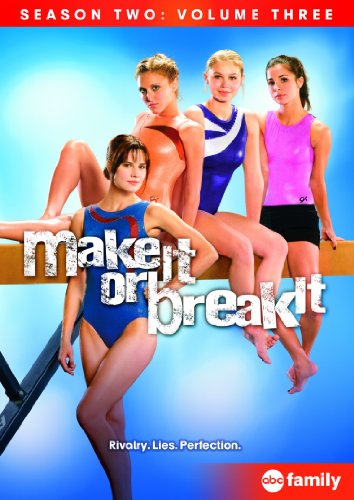 View profile
Caitlin, I absolutely love this review and your amazing phrasing! You have a beautiful style! You write in such a sophisticated fashion but never forget to include cute lines in your work that intrigue your audience! You're so good!!!! Keep writing!