I'm going to review a Gamecube game (which may be strange as it is a long-dead system) and in my opinion it is the greatest game ever created. The game is Super Mario Sunshine and it is a great game despite the strange premise.
The game revolves around the adventures of Mario the plumber in the resort known as Isle Delfino. The adventures aren't like other Mario games in that the majority of time you spend in the game you have a water gun known as F.L.U.D.D. Whatever time you don't spend with it you are going through the massive difficult puzzles called "secrets" and it is not hard to get you hung up on these for days, weeks, even months at a time. The soundtrack for the game was excellent because all the songs are remixes of the original Mario songs. Characters such as Toadsworth, Princess Peach, Bowser, Bowser Jr. and a plethora of Toads make appearances in this game. A main Mario character that actually helps you returns and his name is Yoshi who helps by essentially throwing up on enemies.
Despite all its problems, the worlds are very meticulously designed with an innovative storyline and enough quests to keep even a hardcore gamer busy for months and I give this game a full 10 out of 10 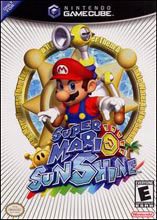 BABY said...
on Oct. 12 2011 at 5:19 pm
SO TOTALLY DISLIKE THIS GAME. SORRY:(  :(
cleo1311 BRONZE said...
on Oct. 11 2011 at 7:10 am
cleo1311 BRONZE, Glendale, Arizona
1 article 0 photos 3 comments
View profile
I loved the game as a kid and I agree with your opinion on it being a great game, but I wish you could have made the description of the game longer. You could add that Mario was being framed as another person caused terror around the town posing as Mario or something like that. I loved this game though!