If it exists, shoot it or blow it up. That is the premise for this Playstation 3 and Xbox 360 blockbuster. I realize that this game is many years old but still many years later; it is just as enjoyable as the first weekend I played it. My favorite part is that this game almost caused an international incident between the United States and Venezuela. What other games can say that (other than Call of Duty)?

The game picks up after the first with the main character, Matthias Nielson, Chris Jacobs, or Jennifer Mui (depending on who you choose) heading to Venezuela to carry out a reasonably simple task of rescuing a high value hostage. Things go south when instead of the large sum of money they are owed, they are repaid with a bullet in the behind (an event that is referred to for the entire rest of the game). So you spend all your time allying yourself with factions from an oil company to China to Jamaican pirates to the communist faction in the jungle and even the Allied Nations (aka the UN).

If you are really bored even after that, buy the DLC pack where you can play as Sarah Palin and Barack Obama (finally a use for him) and do mini games that are really fun.

Its sad that the third game Mercs Inc will never come through but at least Pandemic Studios went out with a (pretty large) bang. The real mourning should be because Star Wars Battlefront 3 will never happen.

I rate this game a 9 out of 10 because of the replay ability. I recommend trying component video cables to play though as HDMI cables cause a terrible sound. Also, there is a certain finality that occurs after you destroy the oil rigs and the biggest building for the last time (but if you want a really big boom, carpet bomb the oil refineries).
Final Rating: 9/10 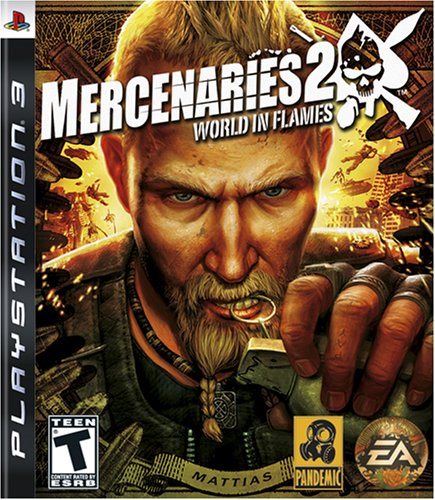