"...All men dream, but not equally." As said by T.E. Lawrence, Uncharted 3: Drake's Deception is the supposed conclusion to an epic trilogy, one that is unlike any other. After the events of Uncharted 2: Among Thieves, Nathan Drake sets out on a personal quest to uncover his ancestor, Sir Francis Drake's secret. What he doesn't realize, is he will soon be thrown into a world of science and magic as one of the greatest secrets of the world turns into one of the most frightening, as it could end everything; the "Atlantis of the Sands."

The Uncharted saga is greatly known for its stunning portrayal of perfect story-telling, human characters, beautiful music award-worthy scripts and ground-breaking graphics, but with Uncharted 3, Naughty Dog didn't just go above and beyond, they spawned one of the greatest games of all time, as well as one of the best stories. Some people say it's just the modern-day Indiana Jones, but i can assure you, it is far from Indiana Jones. The Uncharted saga is much more bold, much more grand, and is truly perfection when you get down to the details. The chemistry between Nathan and Elena is more powerful than ever, as this quest demands everything from Nathan, and his friends alike. Even the friendship between Victor Sullivan and Nate becomes stretched, but not broken. Each game in the series focuses on a place and not just an object; El Dorado, Shambala, and Iram of the Pillars, but with each game, it becomes more apparent that Nathan is trekking into truly uncharted territory (no pun intended). In all of games, movies and novels, the Uncharted saga stands out as one of the best in all categories as it has everything, even horror; if you're afraid of spiders, Uncharted 3 will secure that fear. Adding to the atmosphere of Uncharted, is Greg Edmonson's music. Mr. Edmonson is no stranger to adventure, having done the music for Joss Whedon's Firefly in 2002. With Uncharted 3, Greg Edmonson goes to the same lengths as Naughty Dog; he went past above and beyond with his musical score for the game. Combining middle-Eastern instruments and sounds with traditional instruments, he composed a sound-scape unlike any other in film or games alike; one that can only be matched by Howard Shore's Lord of the Rings compositions, or Hans Zimmer's Gladiator. But it's not just through the graphics, the story, the characters, or even the emotion-driven and awe-inspiring soundtracks, but through the scope and scale of these adventures. They get bigger, bolder, and darker as they get further into Nathan's story, and Uncharted 3 proves this.

If there was a vault, a Noah's Ark of sorts, for the greatest works of art from the world, Uncharted 3 and its predecessors would have to be included. 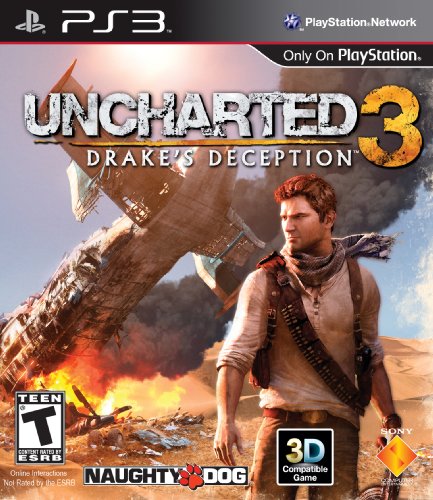 
Buy from Amazon
The author's comments:
The greatest game ever made; overwhelmingly epic, grand, frightening, and captivating on every level
Post a comment
Submit your own

View profile
The way i see it, and how it looks, is Naughty Dog created the Uncharted series not as games, but interactive movies, and that is what they really are. Never in the history of video games have i ever seen anything like this series. They echo the epic scope and scale of the Lord of the Rings trilogy and the Indiana Jones saga. The first Uncharted was incredible, but as a game had a few bugs. Uncharted 2 excelled in every way, as a game and as an art form. Then, there is Uncharted 3, which defied everything we know about video games, taking everything that made Uncharted 2 an instant classic, and broke the barrier between video games and movies. The best franchise in video games, and a saga that has to go down in history
madi_28z BRONZE said...
on Feb. 5 2013 at 7:13 am
madi_28z BRONZE, Falls Church, Virginia
4 articles 0 photos 3 comments
View profile
I agree with your statement(s) that Uncharted 3 had excellent graphics, the story was amazing and the whole concept was completely outside of what we ever could've thought of. However, I feel as if the first two Uncharteds were more about the gameplay, and this one was more about making the graphics look pretty and the story intruiging. Although a player can't fully enjoy the game if they're not engaged in the character's story and goal, having interesting and new concepts to a game is important, too.
Devalara PLATINUM said...
on Jan. 22 2013 at 2:32 pm
Devalara PLATINUM, Landenberg, Pennsylvania
21 articles 0 photos 39 comments

Favorite Quote:
"Would you kindly?" ~ Bioshock

View profile
Uncharted 3 was the reason I bought a PS3. With a 10/10 on IGN, the game is simply amazing. Great review: I think you had all bases covered, from the outstanding musical score to the deeper and bolder investigations into Nathan Drake himself. Great game, great job ;)