Delving once again into the land of much forgotten video games, I am finally catching up with the game of the year recipients of years ago. Elder Scrolls IV: Oblivion was a game of the year a few years back, but its gaming value still holds true today. This review does not include the Shivering Isles or Knights of the Nine expansions, they will come later.

The game is difficult to review without giving away a lot of the plot points, as are more RPG's, expectedly. To start out with, Oblivion is a single player, open world, RPG game. The game has a few aspects of a hack-n-slash, mainly due to the fact a large majority of the game is based on hacking beasts and other inhuman creatures, generally with an overly large melee weapon.

The main quest of the game involves an emperor, a stolen rite of passage, and a ridiculous amount of little side quests to get said rite of passage back from those who stole it. Most of the game involves fighting the enemy that simultaneously proceeds to attack the mortal world and attempts to defend its own realm of Oblivion in an effort to prevent the main character to obtain the Amulet of Kings to appoint a new emperor to stop the essentially immortal beings from invading the mortal world.oblivion-1

Within the game is about a million and a half side quests, none of which are very important and achieve nothing more than consuming a few hundred hours of game play. A total of five side quests breed achievements, not including the expansion pacts, and the other few hundred are essentially things to keep your character occupied if the player needs to build up its strength for the main quest or another side quest. As an open world game, the main quest can be completely ignored while the main character embarks on the side games, essentially wasting the thirty or so dollars that you spent on the game.

The meat of the game, of course, is the main quest. The essential plot points are simple enough, but with so many small things involved in acquiring the necessary ingredient or fighting the right boss can be tiresome, to say the least. Personally, Oblivion falls right into my preferred genre of games, so I could sit and play for hours to beat through the game in a week or so. Many players today complain about the lack of length in a game's single player, but Oblivion is nothing of a sort. Even just the main quest takes the average player fifteen to twenty hours to complete, well over the length of the entire Halo series combined. It is easy to express displeasure with the game for its constant plot twists and the 'I always have to do one more thing' mentality until the game is finally winding down. Even within the main quest, the game can be shortened if the player manages to complete the game without certain portion.

In the beginning of the game, the player gets to choose his race, his basic characteristics, his physical attributes, his class (warrior, magician, etc) and seven main features to emphasize within training. Most FAQ's put a high emphasis on this part of the game, claiming it essentially makes the game either easier or harder, and the attributes and armor types should be carefully synchronized for optimum performance. Personally, an all out strength/endurance/agility worked well for me, although it may have made the game less strategic. Many people in this type of scenario enjoy optimizing their magical abilities, since such a wide range exists. However, this takes away from the hack-n-slash nature of the game, which almost ruins it for me.oblivion-2

Basically, this game is impossible to screw up. As long as you keep the main quest as your active quest, the game gives basic instructions and a map indicator, making it pretty simple to follow along. As an open world game, obviously, these objectives don't have to be completed in any sense of time, and only in vague order. It's simple enough to get lost, but any character with a torch and a decent capability of using the map will be able to find their way back to their intentions. The biggest issue in the game involves lock picking houses and chests, something not particularly difficult but it gets aggravating when you have to travel all the way back to a main city to buy more lock picks from some black market-esque shady guy standing on the edge of town.

More resilient than any of the enemy factions are the city guards and security forces. In a game where the A button is such a general action button, it is quick easy to mis-aim and accidentally steal something from a store counter instead of talking to the person behind the counter. This generally aggravates the city guard, who proceed to arrest you. The three options at this point are to pay a bounty, go to jail and serve time, or resist arrest. Paying the bounty is always the best idea if you have the gold, but if you don't, I&#39d highly suggest just serving your sentence. Your character loses some stats for succumbing, but resisting arrest involves a fight to the death where eight or nine of the guards appear out of nowhere to fight you. Even if you manage to escape the city and ditch the guard, you will not be able to step within that city without being arrested or attacked again. Serving time or paying the bounty completely negates any wrong doing on your part.

Overall, the game is engaging and ridiculously addicting. I personally spent 9 hours straight playing, although that may be quite obsessive. A few critics would contend a repetitive game play as far as fighting goes, but the quests are all essentially unique and worth the time to figure out. The hack-n-slash adds a ridiculously na've side to the game, but one that appeals to every fantasy RPG player since Final Fantasy X. The Game of the Year addition, including the Shivering Isles and Knights of the Nine expansions, is down to approximately thirty dollars. For the ridiculous amount of game play, drop the cash and play the game. 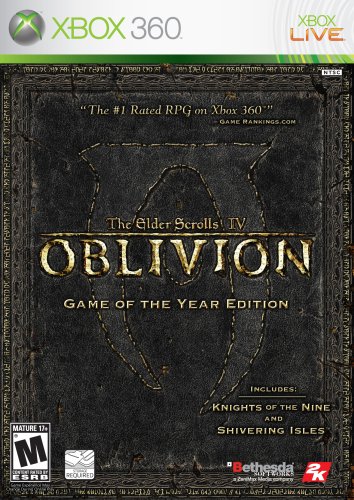