Sororities & Fraternities? The Key to Life in the Greek Letter Societies. | Teen Ink

Sororities & Fraternities? The Key to Life in the Greek Letter Societies.

What are Greek Letter Societies? Greek Letter Societies are Fraternities and Sororities. Where college boys become men and college girls become women. But that's not all of the true facts. Here let me take you through the history right up until modern day and give some other facts along the way.

Gamma Phi Beta was the first group founded as a womens Greek Letter Society, founded in 1875 at Syracuse University in Syracuse, New York, and was first to use the name Sorority. Adelphean began as a literary society at Wesleyan College in Macon, Georgia, in 1851. They adopted the name Alpha Delta Pi in 1905. Pi Beta Phi was the first organization of college women established on a national basis.The branch of a Sorority at some school are called chapters. Most universities and colleges have an intersorority council to regulate general sororities on campus. Now the meaning of the different sororities. General sororities encourage long-lasting friendships. Also encourage High Academic Standards and sponsor social activities. Professional Societies consist of people with the same interests. Honor Societies enroll people who have exceptional academic records. Members who also had done excellent work in a specific area. Some even admit men. Sororities often provide rooms and meals for members in living quarters called Sorority Houses. Many Fraternities admit both women and men but general fraternities only admit men. Women’s organizations are called Sororities. Most fraternities have chapters throughout the US & Canada. National, and International fraternities have thousands of chapters with millions of members. The first Greek Letter Fraternity Phi Beta Kappa, was founded in the United States in 1776 at the college of William and Mary  in Williamsburg, Virginia.  The Kappa Alpha Society was founded in 1825 and is the oldest ongoing general fraternity.

Membership: To join a fraternity, a student must receive an invitation, approved by the Chapter members. This invite is called a ‘Bid’. Later followed by a period called ‘Rush’. During Rush students who would like to join a fraternity, attend events to learn about different fraternities and meet their members. Students who accept bids become trial members called ‘Pledges’ or ‘Associates’. Sororities have the same way of recruiting women. You have to go through all the rounds of sorority recruitment and vote on the sororities. Then on the last day of sorority recruitment, you will receive a bid. Otherwise known as Bid Day. They have a Rush period for learning about the sororities but it's not like the fraternities and hazing they most likely go out and do something with the sorority to find the one they are interested in.

What do Greek Letter Societies Participate In?:

Why do Fraternities participate in crazy tasks like drinking too much or not sleeping? That’s called ‘Hazing’. Fraternity members have Pledges participate in Hazing because Pledges need to prove their ability to live, study, and work with fraternity members before they are accepted into full membership. Many fraternities assign to each Pledge an upperclassman called a Big Brother who offers advice, guidance, and support.  Some fraternities subject pledges to Hazing. Hazing can sometimes require pledges to show commitment to the fraternity by doing embarrassing tasks. Tasks may include wearing odd clothing or running errands for upperclassmen.  Most hazing involves cruel or dangerous requirements, such as preventing pledges from sleeping or making them drink too much Alcohol. 40+ states have passed laws that ban Hazing. Some fraternities replaced it with community service projects that give members & pledges an opportunity to work together. A pledge or associate who fulfills all requirements is initiated and receives a fraternity pin. Pledges who become full members are known as ‘Brothers’. Brothers promise to keep the organization's ceremony and mottos a secret.

Activities: Fraternities play an important role in many aspects of college life. Most fraternities maintain a residence called a Fraternity House where members live,socialize, and eat. Residential life provides experience in self-growth and develops skills in cooperation, leadership, and relationship. Fraternities are well known for sponsoring social events like dances & parties.  Sororities do participate in parties and dances. Sororities are frequently involved in putting together charitable drives and causes, as well as working with other organizations in the community, including fraternities. Sorority sisterhood is considered a big responsibility and time commitment, and allegiance to sorority identity is considered important.

What happens at Sorority & Fraternity Mixers? You might be wondering ‘What’s a Mixer’ well a mixer is a closed party between one sorority and one fraternity. “Closed” means that members from other Greek organizations or non-members are not allowed to attend the oh-so exclusive party. Often, a sorority has a certain frat that they mix with the most and refer to that frat as their “brother” frat. Most people think that is where girls get raped or drugged. But that's not always the case, in some cases the Mixers are to celebrate the years of there being the two societies for just the Men & Women no more sharing one society or being like each other, they can be themselves.

Do Fraternities & Sororities encourage Underage drinking? It is undetermined whether or not Fraternities & Sororities encourage underage drinking. Some chapters have allowed social events to become occasions on which members drink too much Alcohol or abuse other drugs.  Due to these problems some college campuses have banned all Alcohol in general. Others have allowed Alcohol on Campus but for only students that are of legal drinking age. Students who are not of legal drinking age face consequences such as expulsion from the College or Legal Consequences.

Greek Life on TV & in Movies vs Reality? Not all Movies & TV shows are what Greek Life is in real life but it still has the same benefits and some of the same traits that a  real Fraternity or Sorority would have just some movies like Sorority Secrets, Animal House, or Legally Blonde.  Those movies are all over exaggerated. But then some other movies and Tv shows are just like Fraternities & Sororities, movies and Tv shows such as So Undercover, Greek Life, or Step Sisters. Those are based on real traits. Like in So Undercover there are secrets among sororities, Greek Life shows what actually happens in Greek Life, and Step Sisters teaching other sororities different things from culture in other Sororities, The book Frat Girl by Kiley Roache is about a girl going behind the scenes of  Fraternity Delta Tau Chi and see’s what actually happens in a Fraternity, who as been accused of Sexist Behavior. Just to find out that there are some jerks but some sweethearts, but it's not all partying and drinking, its forever brotherhood and life-long lessons.

Greek letter societies  involving Sisterhood and brotherhood are evolved in societies called Fraternities and Sororities. Fraternities and Sororities aren't all they seem to be in movies and shows Fraternities might participate in Hazing but it's making sure the Pledges are worthy of the trust of the Fraternity. Sororities are just the same without the Hazing they are all about Sisterhood and life-long friendships. Now all this information is true it may not seem true but it is not all skanks & jerks in Greek Life its Life-long lessons and friendships 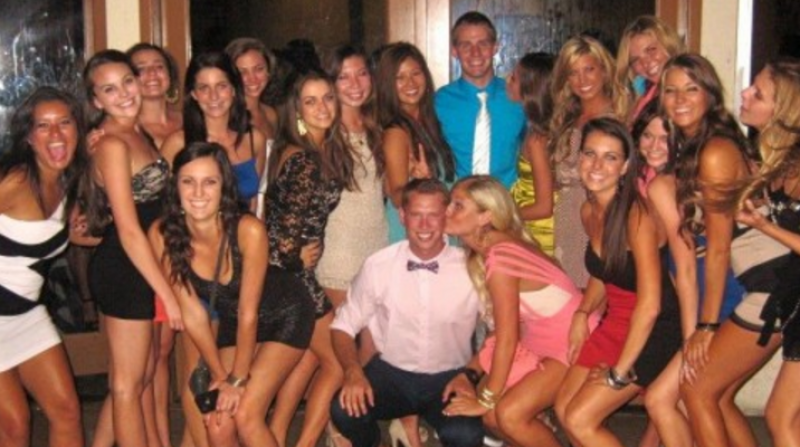 I always wondered about Fraternities and Sororites, basically the whole Greek Letter Society thing. My teacher said write an research essay on anything you wonder about, so when I told him that I wanted to do Greek Letter Societies he asked "What's that" I told him he'd have to wait and see for himself. That got me thinking I've read books and seen movies but is it really like that in real life. Appearently its not all party-party or drinky-drinky. Its more about the friendships and lessons alond with it. I want to live in a Sorority after I wrote this essay about it cause its not all crazy, its wild but its also kinda nice to live with people like you. So here is the Information on these Societies.  If you have any further questions please comment them below.