Favorite Quote:
"the world is your exercise-book, the pages on which you do your sums. it is not reality, although you can express reality there if you wish. Your are also free to write nonsense, or lies, or tear the pages."
- Illusions: adventures of the reluctant messiah by Richard Bach

When I was growing up, we kept the TV in the garage and most of the time I didn't pay it any notice. Since I was four, I&#39d abided ) by my school's “no media” policy quite happily – until the year we moved the TV into the house.

My mother had bought a copy of “The Fellowship of the Ring” for my brother, who is two years older. One day before my parents got home, I sat in the doorway of the linen closet – where we kept the TV – and watched the film from start to finish. As far as I was concerned, the movie was proof that magic did exist. It was possible for humans to have magical powers – all it took was a camera and a costume.

Living for so long without the influence of media allowed me to treat every cinematic moment with the reverence that accompanies all things forbidden. Maybe I just needed an art form of my own, something that, unlike drawing or painting, I didn't associate with the ­average school day. My school, with its free-spirited, no-grades-or-tests philosophy, might sound like the ideal place for an artist to grow. Art and an alternative, rebellious point of view are often a package deal. But there were certain problems that arose for me as an artist surrounded on all sides by art. My rebellion was to become the aspiring filmmaker at a school with a “no media” policy.

Being introduced to the world of movies through the epic adventure of “The Lord of the Rings” was like suddenly seeing a new color. For months I was obsessed with the story of hobbits and elves in Middle Earth. But with just as much fascination, I watched the special features and the story of a cast and crew waking at dawn to make these three epic movies. Are they on a huge sound stage or really in the woods? I wondered as the scenes flashed by. Is that sunset a happy accident or hours spent on lighting­design or animation?

Discovering that I loved movies quickly led to realizing that I wanted to make them. With my bat mitzvah money at 13, I got a MacBook with iMovie and a video camera. I told everyone who would listen about the movies I was going to make. Meanwhile, I used my laptop to hide under the covers, watching Netflix rentals until all hours of the night.

I became an addict. I thought about movies all the time, memorized entire scenes and screenplays, and recited them in whispers to my media-deprived classmates. I rewrote endings and dialogue, creating perfect movies out of mediocre ones, and enjoyed these inventions as fully as the ones on the screen. I snuck movies past my parents like an illegal substance and called myself a connoisseur of film; but I was more like a wine critic who is passed out drunk in a corner.

In the eighth grade I finished my first movie, a montage of “I love my friends and this is our last year together” clips. Editing came naturally to me. I assumed that with a simple program like iMovie editing must be easy for everyone. I created rhythm with images and never thought twice about why something looked right. I wasn't interested in the “effects” menu. I never made warped, silly films for fun.

Last summer at the School of the Museum of Fine Arts Pre-College, a teacher gave us a rule for Photoshop: “Edit an image only to enhance what is already there. Make it look like it came out of the camera that way. Never let it look effected.” I suddenly realized I had been following that rule since I was 13.

I sent that first movie with my application for the film program at New York State Summer School of the Arts and was accepted. When I arrived there, I was surprised to learn that “film” was not synonymous with digital video. I hadn't known enough to know there was a­difference. So quite by accident I spent my fifteenth summer in a dark basement cutting my fingers splicing 16 mm and Super8 movies together.

“Film is so refreshing after video,” one of my teachers said, and I quite agreed. To me, the crisp, silent black and white films were like sketches done by a fine artist, or like poetry – a few lines placed just so.

As my film, a montage of questions and flickering images, played in our final show that summer, a series of images flashed by and then the voice-over asked “What did you see?” as the image went black. “The same thing the person next to you saw?” Now a girl appeared, rolling down a hill. “I saw magic,” the voice-over continued, as she rolled through bright sunlight, then shadow, then sunlight. “Maybe that's just what I wanted to see. Maybe I decided before I saw it to see it as magic. But I still saw it, and I liked it because I chose it. Does that make it less true?”

At the end, the audience murmured in an “I know what she means” kind of way that I hope my audiences always will. That movie was about how I see the world. It was about the day that I watched “The Lord of the Rings,” sitting in a closet, seeing what I wanted to see: true magic.

In an interview, Dustin Hoffman recalls asking Sir Laurence Olivier, “Why does anyone act?” Olivier replied by taking Hoffman's face in his hands and yelling, “Look at me! Look at me!” I look at the world and want to shout, “Look at it! Look at it!”

I step outside and the sky is black and churning. Yellow leaves are blowing in straight lines, and raindrops are falling, audibly hitting the ground. My hair is blowing into my eyes, and a red scarf is whipped across a stranger's shoulder ahead of me.

“It looks like a movie,” I say, and wonder which character I am, which journey I am on. Yellow leaves and wind could symbolize transformation, so I might be on the edge of a new discovery. Or perhaps I'm only walking through and it's the stranger with the red scarf whose life is about to change.

When I toured the Purchase campus in September, we left the admissions building to find that the world had been transformed into a scene from someone's imagination. A storm was blowing up and a low-flying plane thundered over our heads. September leaves skidded around our feet and everyone zipped up their jackets in one motion. “This looks like the apocalypse,” I muttered, and our tour guide, a film student, heard my comment and asked what major I wanted to study. “Film,” I told him. He smiled and nodded.

There is a way that we film majors and filmmakers see the world. We see a story unfolding all around us all the time, a story that is begging to be told. 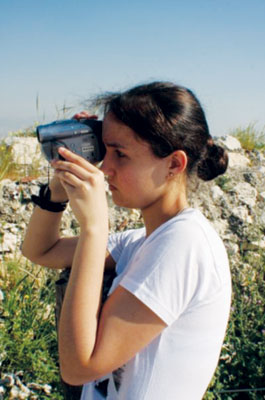 MadAsAHatter GOLD said...
on Dec. 12 2009 at 3:38 pm
MadAsAHatter GOLD, Ames, Iowa
15 articles 0 photos 20 comments
View profile
I think this is amazing, i don't really even know what else to say