I am not a dancer, but I dance all the time.

Frankly, I am not that good at it, but I do it everywhere, whether on the rooftops of Downtown Los Angeles or right in the middle of class. Call me crazy, but I just need to move my body.

Music, beats, happiness, sadness - the nostalgia brings me back a year ago, to the Union Rescue Mission. It was in Skid Row, the poorest part of Los Angeles. I had signed up for foot-washing, and I was armed and ready, with a hand towel and soap bucket, bracing myself for the hoard of Skid Rowians to come piling in. Literally hundreds of them were lined up outside. As they trickled in, I noticed their clothes: dirty, frayed, too big for their frail bodies.

I guided each of them to the shoe station and they eagerly picked out their new shoes. Right about then, some 70's funk music started blasting from the loudspeakers. The beat was contagious, and I felt the need yet again to get my feet moving.

An old woman, draped in a pink shawl and an old-fashioned dress, came bounding in. She started grooving to the funk music, step by step around the stations, raising her arms, looking towards the sky, making her thick-rimmed glasses shine against the hot summer sun. I hesitated at first, but took her cue and began to dance myself, more or less looking like a dead chicken. A crowd had begun to gather around us, and the both of us were pushed towards the middle, dancing with each other. More and more people joined in and a collective succession of claps followed.

As my eyes met hers, I couldn't help but smile. That was one moment, one instant, when all fear was lost, and all of us held on to the glimpse of hope that was ever-present in that sliver of time.

These people have been stereotyped their whole lives, and society has beaten them down to nothingness. They, like too many others, are ashamed of being unconventional; they fear being judged.

I did not know it, but I had not just danced with the woman. We had made a mutual acknowledgement of each other's humanity, of the people we really were. Our dancing opened a door to the relief that comes with being ourselves. When I was honest with myself, I made room for others to be honest as well.

I am not a dancer. But I dance to make a fool out of myself, to maybe somehow, some way, bring hope to those who need it and joy to those who have none. 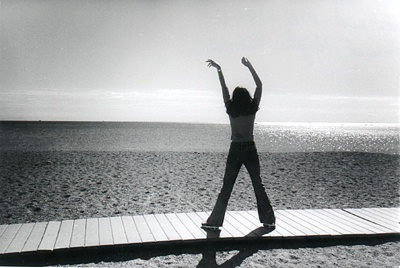 The author's comments:
This is my UC Essay prompt #2. It's about my weird passion for dancing and how it has brought hope to those who need it the most.
Post a comment
Submit your own