Favorite Quote:
“Falling is just like flying except there’s a more permanent destination.” -Some person on Tumblr

July 18th began as a normal summer day. Sunny, but with a hint of thunderclouds in the distance. Colin O’Donoghue was a normal kid. Good personality, with a hint of danger. Today, it will be the adventure that gets him into trouble, along with two not-so-innocent bystanders.

The group, or trio, consisted of Colin, Jordan Clear, and Meg Radfahren. All of them had the same sort of qualities, though Colin was the most enthusiastic.

“Come on guys! Hurry up!” Colin shouted from the top of the mountain. They had been hiking on private property for at least two and a half hours now. His partners in crime didn’t grace him with an intelligent response, but muttered under their breaths until they were at the top, panting. Colin was already investigating the small, flat clearing in the mountainside. The sun made his dark brown hair and almost grey eyes glint. The surrounding trees were all closely knit together, the grass was very thick and green and there was a small cave. He started to spin around.

“This place is amazing!” He said. It felt as if he was taken to another world. They were no longer on Earth, and everything, from the trees to the rocks had something new and dangerous about them. It reminded Meg of the Black Forest in Germany. When Meg and Jordan caught their breaths, they just stood there with their mouths open.

“What is this place?” Meg asked, still rooted to the spot.

“Paradise.” Colin replied. There was a small river that fell to the left of the cave and it’s water sparkled as though it was filled with a thousand diamonds.

“I feel so, light. Like I’m filled with clouds.” Meg said.

“Yeah, I know what you mean, like you just ate a whole tub of cotton candy, or marshmallow fluff. “ Jordan said. At this point, they had all convened by the river and were staring at it with hypnotized eyes. Colin dipped his cupped hands into the river and drank. The sky became a little darker. Meg and Jordan both followed his lead. Thunder rumbled in the distance.

“Guys lets go explore the cave!” Colin said after he wiped his face.

“Meg come on, you’re such a party pooper.” Colin interrupted.

“No, Colin. We are already on private property, and I’m starting to get a really strange feeling about this place. If we get caught it will not look good on our records for college or a job.” She glanced over at Jordan, waiting for him to back her up. “Jordan?” The skinny, mid-height guy was staring straight up, into the ever-darkening sky. His medium long, brown hair was whipping around his soft, angular face. When he turned his head, his green eyes were wide with worry.

“I think we should go inside!” The roar from the wind had picked up tremendously, and he had to shout to be heard. They all turned and ran into the cave. A huge gust of wind knocked them over and they fell into its wide opening.

“Is everyone o—“ Colin stopped talking. The rain had started to pour, and it looked like the exact same crystalline water from the waterfall; it was beautifully dangerous. The air felt energized, and at that moment, a massive lightening strike caused a huge boulder to fall and block the entrance, leaving them in darkness.

“Oh my gosh! We’re all gonna die!” Meg started screaming. Colin lit a lighter from his back pocket, which threw the cave into a soft flickering light.

“It’s not a cave, it,” he hesitated, “it’s a mineshaft I think.” Jordan gazed around; he eyes scanning across the tracks on the floor.

“Hey guys! There are torches!” Colin went over to a 3-foot tall column with a basin at the top, which had a small aqueduct like shape that ran deeper into the tunnel, with periodic columns following.

“Well what are you waiting for, light them!” Meg said. She was afraid of the dark from an incident on Halloween in her childhood. Meg stood at about 5’2, she had dirty blonde hair with chocolaty brown eyes. Her face was long, and she had a very light dusting of freckles on her nose and cheeks. Colin brought the lighter over to the basin, he couldn’t make what filled the bottom. When the flame caught, the flame spread, and slowly began to light the rest of the tunnel. Colin went over the right side of the tunnel and lit that one too.

“And let there be light! Is that good enough for you Meg?” He said jokingly. For the spreading of the flame along the strange contraption was quite magnificent. They could still hear the wind howling and the rain pounding outside.

“What to we do now?” Meg asked, as she moved over to avoid a leak in the roof of the cave.

“We could always try to move the boulder.” Colin suggested. The three of them pushed and pushed against it but with no avail.

“Do you hear that?” Jordan said, huffing from exertion. “Shh, quiet! Everyone shut up!” They strained their ears to hear over the rain.

“I hear it! It’s like a soft rattling or scratching or something.” Colin said. He peered into the darkness of the tunnel. All the sudden it stopped.

“Where’d it go?” Jordan asked. He seemed a little shaken by it.

“I don’t know, who cares? We should be figuring out a way to get out of here!” Meg said a little too frantically.

“Chill! We’ll find a way!” Colin said. He was beginning to feel frantic himself.

“I think the only way out is to go farther in.” Jordan said, cautiously looking at both of his friends. They stayed in silence for a few minutes until Colin spoke up again.

“Well, before we go, we should probably check our inventory.” He said, taking charge. “I obviously have the lighter, plus two cough-drops, my wallet, and a pack of gum.” He held them up to the light.

“Let’s see.” Jordan rummaged through his hoody pocket. “Swiss army knife, a pen, and a mini plastic light-saber.” Colin and Meg looked at him. “What? It was a prize from my cereal this morning.”

“Um, anyways, all I’ve got is my iPod. It would really help if one of you actually had a cell with you.” Meg’s parents can’t afford a cell phone, and both Colin and Jordan were grounded. They shouldn’t have even left their houses today. Jordan reached up to touch the ceiling.

“Ahh, what the heck?” He jerked his hand back, “It shocked me!” Jordan inspected his hand, which now had a small burn on it. Meg reached up to do the same.

“Geez Jordan you weren’t lying!” She too pulled her hand back after a white flash appeared by her hand. She was also burned.

“Okay so, electric walls, shiny rain. This place is messed up.” Colin said. “We should start making our way out.” They began their journey to possibly find freedom. Along the path, they pretended not to notice the bones, and what looked like skulls embedded in the walls.

“Hey! There’s that scratching again!” Jordan whispered. They peered into a tunnel that split off of the main path that opened to their right side.

“What is that?” Colin said. There was something shuffling towards them on the ground. All of the sudden, a deafening boom shook the tunnel. The rattling noises increased, and a 5-foot tall man, who was very pale, appeared and steadily came closer and closer.

“Oh my God, guys look!” Jordan pointed down the tunnel behind them. The bones that were in the walls had begun to loosen. Bony hands and feet burst through the solid stonewalls. Rock and bone were flying.
“Run!” Colin screamed. They took off down the uneven floor of the tunnel, taking great care not to trip over the bones. The adrenaline had completely taken over, and Jordan didn’t even feel the scrape he got on his arm from a skull.
“We need to find a way out!” Meg shouted near hysteria. As she was running, she tripped over a bony femur. A skeletal hand had inched forward and grabbed onto her foot. She let out a bloodcurdling scream.
“Meg!” Jordan shouted. Colin and Jordan skidded to a stop and ran back to pull the animated objects off of her, the hand came off with some trouble.
“Hurry!” Jordan pulled Meg to her feet, while Colin made a makeshift torch out of his shirt and a stick he found.
“Colin what are you doing?” Jordan shouted at him as they were running.
“Making a torch, what does it look like?” Up ahead, Jordan realized that the basins of fire stopped, and the rest of the tunnel was pitch black. “Great. Just wonderful!” As they ran past the last basin, Colin swiped the torch in and lit it on fire.
The light from the torch barely lit up the tunnel and everyone was stumbling and tripping, doing the best they could not to fall into the floor, which was now under a blanket of writhing bones.
“Oh thank God!” The relief in Meg’s voice was evident even with the echoing sounds in the tunnel. The sea of bones had ended.
“Woo hoo!” Colin did a fist pump after he crossed the threshold of calcium.
Jordan watched the writhing mass wearily, “I still don’t like this.” He said giving Colin a sideways glance. He had interrupted Colin’s victory reprise of “Stayin’ Alive” by the Bee Gees.

“And you think I like this? We’re surrounded by, well whatever the heck these things are called.” As Colin finished his reply, a full-scale skeleton began to rise. Colin grabbed his torch, swung it, and destroyed the skeleton.

“Let’s go.” Colin said, but as he did so, he stepped on the wrong area on the floor. It was a booby-trap! The small platform sank a little bit, and a sparkling gas came out of the walls. Meg felt instantly dizzy. The muscles in Colin’s legs became jelly. Jordan’s vision began to fade. The crowd of skeletons were closing in around them. Meg forced her drooping eyes open enough to pull both Colin and Jordan away.

“We have to find a way out of here!” Meg shouted groggily. She could barely hold her eyes open.
“We can’t it’s a dead end!” They stopped inches away from a solid stonewall. “No!” Colin screamed. He pounded his fist on the wall.
“Uh, guys?’ Jordan asked. Squinting, he pointed to his feet. He had set off a trip wire.
“Jord—“ Colin didn’t even get to finish his sentence, for a trap door in the floor opened up beneath them, and they fell into a dark abyss. 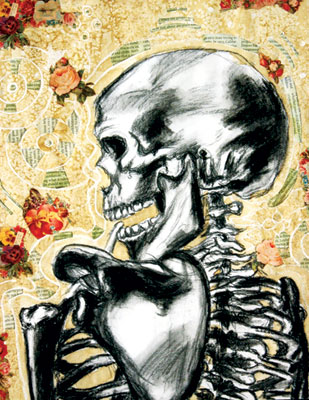