Favorite Quote:
It's straight up hiss up in Mug!

I guess that wasn’t nice but it is so true!
Let me start over!
Today should have been a really good day. I mean it’s the last day of school. So the school day part was fine, nothing out of the ordinary except that Jared got a call from his totally hot friend (that was supposed to be my date for the evening). Sure he calls Jared all the time but this time Jared looked scared and shocked. And to make matters worse he wouldn’t tell us, not even Trisha who has been his girlfriend since 9th grade. That’s totally going to put a dent in their oh-so-perfect relationship. I’m so jealous. I mean I may not be drop dead gorgeous, but some guy would like me right? No NEVER! I will always wait for my prince charming. I never do set ups or blind dates, and the one time I do he turns out to be lunatic.
Let’s stay on topic here!
So Jared doesn’t tell us but he never cancels the plans, so me and Trisha show up at his house, only to have his mother say he’s not there.
Trisha asks, “Where is he?”
I didn’t care I just wanted to know if my date was coming, or would I have to make other plans to celebrate tonight. So his mom told us he was at some skyscraping building downtown. And I thought quietly to myself. “Why on earth would he be there?”
I mane is he an aspiring executive or something. IMPOSSIBLE! No offense to Trisha’s taste but Jared is one of the stupidest people I know. Last year I ask him to give me a dollar worth of quarters and he gave me a hundred!
“What is this Jared?
“I gave up your quarters. You see it’s a hundred because a dollar is a hundred in cents, you know? You just move the decimal.”
“Uh-huh yeah. You idiot that applies to pennies. You are so STUPID –
Let’s just forget about that and back to my day
Okay so we go to that building, and we searched every floor. So believe me when I say my heels we’re starting to kill. I told Trisha let’s go, she agreed but she always wanted to go to the roof of a building. So I said okay, even though I am totally scared of heights! But it is a good thing she is such an adventurer, because we would have never found Jared and his … Friend. So we walk right there and standing on the ledge is Jared’s friend Nick. (Standing there on the ledge being dangerous he was hotter than ever!)
Back to the point
Jared saw us and explained the situation Nick won’t come off the ledge because he wants to kill himself because his parents don’t care about him and Jared can’t help because he said he’ll jump if Jared comes closer. Well that’s when Nick started talking crazy.
“Oh are these our dates for tonight?” he said with a smile.
“Yeah.” Jared answered nervously.
“Which ones mine?”
Jared pointed at me and I waved slightly.
“Well come here, we can still have this date right? “
I didn’t move.
“C’mon. Look if you don’t come over I’ll jump.”
I thought about it. Even though he was my date, I didn’t know him, so him dying wouldn’t faze me at all, so I didn’t move.
“You want me dead too, huh? Understandable. Well Today’s your lucky day!”
He was starting to lean over the edge and bending his knees prepared to jump. Jared and Trisha started screaming and crying so I just throw myself at him, but that didn’t stop his flight pattern.
“Hi, are you afraid of heights? “
I nodded my head like a maniac as I looked down.
“That’s too bad.”
Then he launched off the ledge and I SCREAMED, PUNCHED and cried. Luckily his launch was more out than up and we landed on the next building over, which was a few stories lower. I would have had more bruises but I landed on him... He was laughing as he got up. I got up punched him hard in the chest. It didn’t faze him.
“C’mon let’s go” he said suddenly serious
We took the elevator down to the floor. The whole ride we said nothing and looked so angry. We got to the floor Trisha and Jared were there. They were so concern to see if we were okay. Nick left before they could touch him, but before he shot me the deadliest glare like it was my fault or something. He went out the door and I followed behind.
“Hey what is your problem?” I demanded
“You” He answered
“What?”
“I could have been dead if it weren’t for you.”
“It’s not my fault you’re not dead. You landed on the other building. Maybe somebody wants you alive.”
“Ha Likely story.”
“What then?”
“I landed on the other building because I couldn’t kill you.”
“And that’s my fault how?”
“Drop it.”
And like that he walked away. You know I hope I never see him again. I hope he does kill himself. Who cares?
That last part wasn’t necessary.

So yeah that was my day. And the climax was I almost died being part of someone’s suicide attempt. 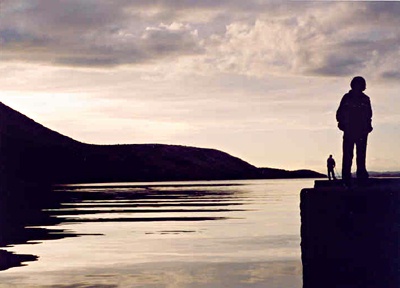 The author's comments:
Katy is just normal girl in high school, and in one summer the crazy spiral called Nick manages to chnage it all. In the next chapter expect some secrets to be revealed.
Post a comment
Submit your own