The stucco was rough under my fingers, a tan color. I liked the way it caught and held the heat, like the memory of a friend. Most evenings as the sun set, I would press my cheek to the western wall, watching the way the burnished copper light caught the red highlights in my brown hair. The wind would snatch and tug at the ends, but since it was usually braided only the wisps were free to fly about my face.

Jeremiah would tuck them behind my ears when we were close enough to speak; at first I figured it was because he didn’t like the disorder but then I thought that it was because he liked to touch my face, so like my mother’s, his sister’s. Losing his eyesight when he was 47 must have been hard for him: rodeo-rider, the best calf-roper in the county for 15 years before he got too blind to see the barrels. He was good-looking still, rugged, the archetypal American cowboy, if you will. He liked his slouch-brimmed cowboy hat and worn Levi jeans, and flannels in the morning before the sun was up and the chill of night still clung to the hills and valleys.

He used to walk out by himself, and later, as the light dimmed for him, I would walk with him hand-in-hand, watching our shadows on the ground before us. Sometimes he told me stories about the land, about the Tricky Wolf and the Wise Crow, and the sun that gave us gold in the form of corn, when it dipped into the ocean. It seemed that we had more in common through the land than our blood.

I didn’t believe all of what he told me, but he would touch my face and say my name, and look into my eyes from close range, where I could see the beginnings of the cataracts in his. Something true was there about him, but so far it was not discernible, especially not to me at 17, when most kids would believe anything and I would believe nothing. But he cooked me breakfast for a year, until I learned all his secret recipes and became the one to hoe the garden while he smoked a cigarette and traced the shadows on the walls with his fingers when he wasn’t out with the sheep.

Jeremiah fed the lizards that passed through the southern canyon in the fall. He threw pieces of leftover meat the dogs didn’t get and the lizards would snap them up as they walked. I don’t know what they did down there, what they were walking to or from, but I liked them immensely, and I used to watch them all day if I could. All the way from the bend in the east to the bend in the west, several in an hour, more than a dozen a day, like a march, leaving and arriving at some place in their lives. It occurred to me that I never saw them going in the opposite direction. I mentioned this to Jeremiah, but he said that if I had time to watch them, I’d see return trips. I think he knew that the lizards didn’t come back and feeding them was just something he did to make their journey a little more bearable.

Once Jeremiah talked about wanting to be buried in the canyon, and I thought about him lying under the dusty ground where the lizards made their trek and said no, I think he should be buried somewhere that the sheep would pass and the sunset would touch.

It was so quiet then; the wind used to speak to me on the nights when he was away. He told me about La Liorona, the spirit of a woman who drowned her children so her new lover would accept her. Legend says that her spirit still wanders the night, wailing and mourning her children, lamenting what she had done and looking for other children, lost children, to take as her own. But her story did not instill fear in me, and I pitied her.

Before Jeremiah left with the sheep, each time he left, he warned me not to sit on the boulders at the crest of the hill after sunset, and I didn’t, but I did sit there until all but the very last rays were below the ground, and then I trudged back to the casa, missing the presence of my shadow. 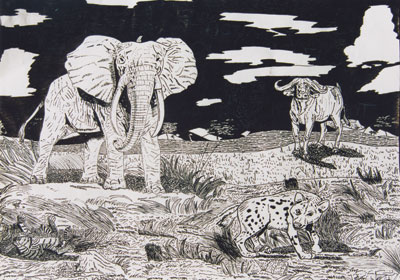 Favorite Quote:
"Everything in this room, everything you see is eatable. Even I myself am eatable, but that, children, is called cannibalism, and is frowned upon in most societies."

I like this, it was very sweet, and the descriptions were great! I especially loved the part at the end, with the sunset.

In my view, La Liorona was an ambiguous thing, which I really liked, because I prefer it when the author leaves some things up to my imagination. I gathered that he didn't have any kids of his won, so he'd taken her in as his own. I suppose other interpretations are out there (Sorry if it actually had a definite place in the story that I'm just too stupid to see :D)

Critique - I'm not sure, actually. Maybe some dialogue could have made the piece stronger. Not a lot, but just a really powerful line directly from Jeremiah, not through the medium of the narrator.

Favorite Quote:
These violent delights have violent ends, which in their triumph die, like fire and powder, which as they kiss consume. Romeo&Juliet.

View profile
this is really good. your detailing is amazing (: