I am filled with a dreadful hollow, like flakes sifting on the Antarctic plain. Empty, though I’ve just eaten rice cakes and peanut butter and tea, even though it’s summer and sweat slides down my back like tears. I am a circle that wishes to be a sphere, bulging with perfect roundness, a 3-D knowledge that has light and a shadow, which talented artists learn to draw. Circles are for babies. Circles are flat, deflated.

I am tired even though I just woke up. My mother calls from somewhere far away, from down the stairs or from the far side of the Pacific, from underneath a sea locked with secrets, lapping at the shoreline, worrying away the beaches. Don’t tell. Don’t tell. Don’t …

I don’t. I hold my belly, flat and smooth. For now. Somewhere in the backyard buried under a pile of dirt and tenderly ripped up, a strip of paper tightens its creases into a smile. A smile with a blue line.

School today. Mother doesn’t like it that I still live at home, as my other sisters and brother have gone on with their lives, swallowed up by a hungry world. A world pockmarked by angry pink rashes of people. But I am good, I always leave and return on time, like clockwork, if clocks were as dependable as I am. Humans don’t run out of batteries, or shut off during lightning storms, only to reappear stuck on a flashing 12:00. So I clutch my bag and smile, making sure to squint my eyes a bit, so Mother can’t see that inside I’m standing on my head, and my smile is really upside down. I am a pinhole camera flipped over. She sees only my reflection.

My steps quicken until their cries match the drumming of my heart. They take me left, instead of straight, to the city bus. Not to school then. Not today. A man with a raincoat shoves his way past me, into a puddle that looks like the coffee that little kids make in the dirt. More mud pie, Mrs. Tottery? Why yes, thank you, Mrs. Flemmington.

The hospital is close, only a block or two from here. The doors hesitate and then slide open, pristinely, as if choosing whom to let pass. I nod a thank you, pressing a hand to my stomach, and we go in. A spindly woman with a walker inches her way toward the elevator ahead of me, so I choose the stairs instead, jumping them two at a time. Everyone knows elevators are coffins anyway.

More white walls and sharp corners later, I turn to the nursery, press my nose to the glass like a kid outside a candy shop. My breath catches as I look at the wrinkly red faces, the curled hands, and defiant tufts of hair. Oh. I bite my thumb to keep from crying out as a sliver of my heart dislodges like a rubber ball bouncing down a metal fire escape. I can hear the echoes, but instead of fading away, they get stronger, like echolocation, like the piercing whistle of a dolphin. I think they can hear it. One of the babies turns its face to me, stretches out an impossibly small arm. Before I know it, my own arm encircles the door handle and –

“What do you think you are doing?!” Damn. A nurse, her blond hair frizzing beyond the confines of her bun, angrily confronts me. Her glasses swing on a golden chain. I watch the way they catch the fluorescent light and toss it back, softer. I try to answer. “I-I …”

“You’re not allowed in this area without supervision.” Her gray eyes peer closer. “How old are you? Shouldn’t you be in school?”

“Nineteen,” I mutter to the polished floor, speckled and scuffed by shoes before me. I am in the stairwell before I realize I have left. No one comes after us, but I still listen intently for someone to give chase for several minutes. Or days. Something smells like a rubber band, and at first I think it is the sterile corridors, but eventually I work out that it is me, stretched tight and thin. Once rubber bands snap they aren’t any good. You have to throw them away.

I walk around for a bit, and then head for the Gloria’s Dairy Dream, the ice cream shop where I work part-time. The bell dings when the door opens. Gloria is the ex-wife of the man who owns the place, a tall balding Texan we call Mr. Alster. I step into the cool winds of a desert with black squeaky chairs and spiny tables like tops. A desert with dessert. Mr. Alster glances my way. “You’re early. What, no school today?”

“Nah,” I say, the lie threading through my tongue with ease. “Sprinkler system malfunctioned during Chem.”

Natalie comes through the back door bearing a load of raspberry triple fudge, her paper hat askew, dark brown eyes sparkling. “Idiot delivery boy. Did ya see him drop half of the mocha all over the pavement? I swear, next time I’ll give him a piece of my mind. I could do without, but, no, he has to carry it all in himself.” But the corners of her mouth turn up and I know she’s really waiting for the delivery boy to ask her out, because she’s the first one outside when the truck horn sounds every Tuesday.

“Lo!” She smiles at me. “Could ya be a doll and do the counters? They’re a wreck, honest to God.” I oblige with a quick jerk of my head and wrap a bubblegum pink apron around my waist, more carefully than usual.

During break, I dodge into the bathroom, pulling my shirt tight to see if I show yet. If it’s a boy, I’ll name him Kevin Albert, and take him to get ice cream every week. We’ll stand before the array of frozen treats like crayons in the snow, and he won’t be able to decide, so I’ll get one flavor and he’ll get another, and I’ll let him sneak bites from mine. If it’s a girl …

Someone flushes and comes out of a stall, and I make a show of washing my hands, like I spilled something sticky on them. I imagine a mixture of Elmer’s glue and molasses crawling slowly up my arm, and I scrub harder, leaving fingernail trails behind.

It’s Natalie waiting to wash her hands, and she taps me on the shoulder. “Hey, did ya know …” She points at the back of my jeans. It could have been anything really. I might have had a pen burst in my pocket, or sat on a jelly donut, or … or gotten my period.

Suddenly I am retching over the sink, sobbing and inexplicably babbling about ice cream flavors. Then I smell watermelon shampoo and Natalie hugs my leaking body, my flat belly. “It’s okay,” she says.

Later, I wake up on Natalie’s couch and remember dreaming about snow drifting. And someone laughing, someone happy. I think she might have been two or three, but it’s funny that her name was Anne, because that’s my name too. If it was a girl I would have named her something else. 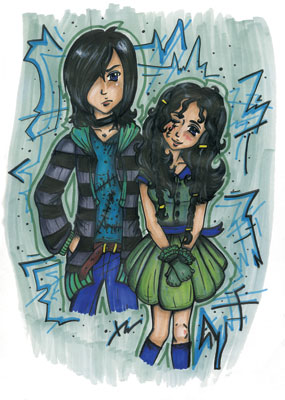 Favorite Quote:
"If you are in need of forgetting something, make a note to remember it."

Favorite Quote:
an eye for an eye, and the whole world goes blind~Ghandi

Well that was just about too amazing. I adore your work,

Your story had me in tears,

You're going to have a book someday. believe me.

Favorite Quote:
Life is what happens when you're busy making plans.

View profile
That was great. I loved how it ended too. At first I didn't get why she paid so much attention to her stomach, but I really liked it.