Favorite Quote:
"Never frown. You never know who's falling in love with your smile." -Anounymous

The last thing I remember was her cell phone vibrating. She was talking at me, I had called it, because I had nothing to do but listen. She was telling me a story about a boy that she liked and I listened even though I had no interest in the subject. I was nine. Although I often knew nothing of what my sister was saying, I had felt proud when she told me things, like I was someone she confided in though she was a lot older than me.

The faint murmur of her cell phone interrupted her story. I stood there, on the train platform, staring at the empty tracks. We were waiting for the 3:32 train to arrive to take us to Manhattan. Our parents were below us, buying our round-trip tickets. Sarah was put in charge of watching me.

She turned away and walked to the bench behind us to grab her bag as I continued to stare at the tracks, wondering why the train was taking so long. Time seemed to be moving in slow motion for me at that age.

I heard the soft vibration again and again and turned around to see why my sister had not yet answered the call. I turned left and right, trying to see where she was hiding. I searched around, calling her name, not realizing that with each vibration my sister was getting farther and farther away from me.


I rewrite this story again and again. I have done so every night since the one Sarah went missing. I don’t know why I still do it. Maybe I’m looking for something in the story to tell me why it happened. I’ve searched the words for the past five years and have not yet found my answer.

The people my parents hired haven’t found their answer yet either. Every Thursday evening a nice man named Mr. Franklin tells us the same thing. My father thinks they’re still trying. My mother thinks they’ve given up. I want to stop thinking. Just for one moment, I want to be able to be calm, not act it, and resist the thoughts of what happened.

I’m five years older yet time still moves as slowly as it did when I was nine. We are the exact same people we were that day. Though my hair is longer and I’ve grown taller I feel as if I never really grew up, knowing that my sister might not be.

The clink of her keys tells me that my mother is leaving the house. I decide that I want to go with her because my father isn’t home. My mother and I are opposites. She likes to be alone most of the time, where I am afraid of being by myself for too long.

We leave the house and my mother tells me that we are going to the supermarket. We start down the driveway and pass the houses on our short block. We take a different route, a longer route. I don’t know if my mother realizes she does this anymore, we’ve done it so many times, it’s our routine.

We’re on one of the backstreets now and my mother speeds up. Our long silence is interrupted by a siren. My mother glances back and pulls over to the side of the street. As the officer walks up to the car window my mother’s expression is unchanged. She stares straight ahead and nods as he hands her a ticket for speeding. We both watch as he walks back to his car and drives away.

My mother doesn’t move. She continues to stare out at the road in front of her.
“Mom?” I say. My mother doesn’t look at me. I say it again and don’t receive an answer. Staring straight ahead she begins to sob. She puts her head down on the steering wheel, never looking at me. All I do is watch her, feeling helpless. I don’t know how much time has passed when she sits up and turns the key in the ignition. We go to the supermarket, each pretending that nothing has happened.

That night, I retell the story to myself. I wonder what I did to deserve a life like the one I have. The ring of the telephone stops my thoughts. I hear the phone ring again followed by a gentle, “Cara, please get down here,” through my bedroom door.

I pull the blankets off of me and follow my father down the stairs. My mother is sitting at the dining room table, crying. I don’t speak. I just watch my father. He sits down opposite from my mother, crying along with her. “Officer Franklin called,” he says, putting his hand to his forehead, hiding his eyes from me. I say nothing, and in silence we wait.

We jump as we hear a gentle knock at the door. My father moves rapidly and opens it. Officer Franklin wipes his nose with his handkerchief and sits down. “Good evening, Tom, Michelle, Cara,” he says carefully. He breaths in what seems to be a gallon of air. “We’ve received information regarding Sarah’s whereabouts. We believe we’ve properly identified--”

My mother cuts him off by coughing loudly. She gasps, trying to speak. “Identified?” she repeats.

Officer Franklin puts his fist to his mouth. I can see the circles under his eyes that I had never noticed before. He nods.

At his response my mother looks up at my father, starting again to sob uncontrollably. I can see the white of my father’s knuckles as he grips the edge of the glass table.

I don’t say anything. I stand up from my chair and move next to my mother. I place my hand on her back. I am not crying. Maybe I will feel all of the things she’s feeling later, at another time. Maybe time will move again. I feel nothing but one thing. Though my sister is not, I feel home. 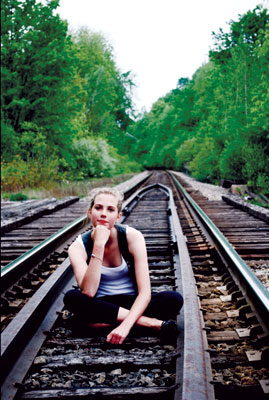