They walked down the aisle, their faces stone, unmoving. The funeral music played, slowly at first, but picked up pace as they got closer to the casket. It was open. All three of the giant, muscular men looked inside, shadows flittering across their faces.

Alice Crinshau, a terrified-looking thirteen year old girl was peering from inside, wrists and ankles in chains, hyperventilating heavily.

Their emotionless faces suddenly grinned into wicked-looking monsters with sharp, gleaming teeth and eager, hungry black eyes. Their eyes glittered with jealousy and hate. They pounced upon her.


Alice awoke screaming, her hands grabbing her head. Slowly she emerged from the nightmare and began to realize she was awake, free from the monsters with the sharp teeth and horrible eyes…


Her parents were there, smiling and screaming ‘Happy Birthday!’ before they could grasp that she’d had a nightmare. They carried her limp, shell-shocked and rather confused body downstairs, where her five best friends were waiting along with her three brothers and one sister, around a homemade cake.

The cake was her favorite, with vanilla icing and chocolate flavored cake. On the top was a single candle, alit happily.

It was her sixth birthday.

The prey had escaped their grasp once again. Silly girl thought she had a chance. It was too late, however. They would have to wait for her to return. They could nothing until then. Nothing except plan. The monster reflected on the fact that despite she was a complete nuisance, they needed her so that they could kill her, FINALLY.

“What next?” the queen asked, the darkness of the cave hiding her from the sight that frightened her. The beast had never seen her, and the one time he tried to see her out, her nervousness bit at him like a slap to the face, shocking him to stop. She really, really did NOT want to be seen. He knew when she came because she smelled of fear.

“We wait,” he said simply and she hissed, then cracked at the end, shyness more powerful than her desire to kill the girl.

“Happy birthday!” all ten of their voice shouted happily. Alice’s hands flew to her ears. Their screams snapped painfully. She squirmed out of her father’s clutch until he lowered her to the ground. Alice ran out of his outstretched arms to her friends, exploding into hugging them all, tears streaming. Everyone suddenly poured out questions, what’s wrong? what happened?, but she just shook her head and held on to that one last friend that hadn’t backed away to see what was wrong, Shyanne, a skinny girl with long mouse-blonde hair. She held her tighter.


Finally her mother pried her away forced her to meet her eyes.

“What’s wrong? What happened? Tell us or to your room you go,” she said sternly, waiting for her daughter’s response. Alice looked up at her with sparkling brown eyes, silently pleading, but finally nodded and wiped her tears.


Alice stood up and met her mother’s eyes. No one could talk, the silence was jagged, sharp like a knife.

“Monsters.” She said simply, then ran to her room. 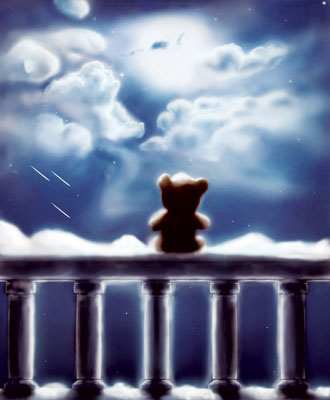 The author's comments:
I'm know what it's going to be about but I'm having trouble moving on from this point. Enjoy!!!
Post a comment
Submit your own