One of my friends was saying how his dad was goingto crack any day. This wasn't unusal in our neighborhood;people cracked all the time. People weren't gentle with us. Istudied his white, round face as he talked in a lowvoice.

It was dark outside now, but it always seemed tobe dark ... and cold. Suddenly a rumble stirred the wholeplace; there would be ice soon. Then we heard the voices. Theywere strange and God-like. One boomed, "Do you wantcoffee, dear?"

"Sure, I'd love some. Howabout some eggs, too?"

Theword "eggs" frightened everyone in the 'hood. A fewpeople had left; no one saw them leave, we just heard theirscreams followed by a crack-splat and sizzle. One of thebooming voices interrupted my thoughts. "Fried, dear, youknow how I like 'em."

I felt the entire neighborhood tremble,then the sun came out. My friend cried out in protest at thesudden light. A five-pronged shadow came down and grabbed twoof my friends, Tom and Jerry. "Two eggs,right?"

"No, three, thanks." The shadowcame down again and grabbed Tom's sick dad. When theappendages wrapped around him, he imploded. White and yellowguts spilled, coating me in slime.

"Yuck!"the voice said, annoyed by Tom's father's insides. Some of myneighbors were crying but most wore scared and disgustedfaces. The sun was suddenly shut off. I heard running waterand complaining. Tom's dad, or what was left of him, wasdripping off my round body. The light came back and this timethe shadow grabbed John, a close neighbor.

Tom, Jerryand John were all sitting on a white counter next to a hugepan. The appendage, no longer a shadow, grabbed Tom with itsskinny stalks that grew from one end. It took Tom and bashedhis frail body on the edge of the pan. Tom flew to the sidesand then with a plop, his guts fell out and started to sizzle.The appendage repeated this process with Jerry and John. Thelight was cut off after I saw three friends meaninglesslyslaughtered. Tom's dad's insides were starting to dry on mybody. A few minutes later I heard, "Mmm, those were greateggs, Chris. Thank you." 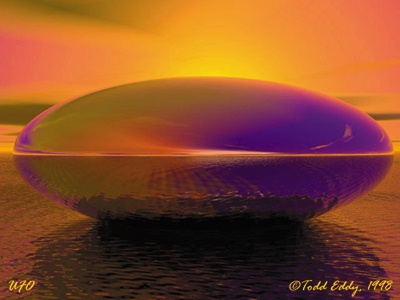