Favorite Quote:
Smile More It's Worth It
-Desi

I remember the war, as I stood with my brothers and watched Lucifer fall and the creation of Hell. But my brothers aren't Brothers anymore and we are here as mortals to take a dark soul before Lucifer does.

Creepy right. Well i didn't want to erase it if it was a message from God. I was in much shock when it happened. The fact that it was unexplainable almost killed me. It became an obsession. i really just wanted to know who did this to my wall or what did this to my wall. I was scared, I must admit, but I was curious. Wasn’t it God who flooded the world because of our curiosity hoping starting fresh would be better, and wasn't it curiosity who killed the cat, but then again satisfaction brought it back.
As I sit there on my computer I wonder why would he chose me. I’m just another man in this world. As i wondered I suddenly felt really tired. I tried to stay up and continue my work but the heaviness in my eyes got to me and slowly but surely i fell asleep.
When I awoke i found myself in my bed. I got up and walked out into my living room. My front door was wide open. I walked over to close it. When I turned around i saw it. The deep blackness in his eyes pulled me in. I was found in a different world. Within this world there was nothing, just blackness. It was amazing! Something about this nothingness was so unexplainable. It took my breathe away. As we came back we were face to face. I wanted to say something, but i couldn’t. He had large white wings. He told me his name, a name I will never forget. One that i had heard of before. His name was Uriel. He spoke with such grace yet i was afraid. He had pointed at the dried blood on my wall. I thought of what it said. Then he put his hand on my shoulder and I wasn’t afraid anymore. Then i realized who he was. He was Uriel,ArchAngel Uriel. In all his greatness. He told me one thing more and that was he needed my help. After those final words he vanished but what did he need my help with.

As soon as i regained my ability to understand what had happened i took out my journal and began to write. I wrote down the entire thing. When i had finished, I looked at the cross above my desk. For a while I just stared at it. I was tired so i thought I’d sleep on it. I’ll worry about it in the morning.
The next day I got straight to business and wrote down the rest of the story. I knew he was an ArchAngel, he wore a long black coat with black pants, I knew he was sent by God, and that God uses ArchAngels to do his work here on Earth. Then i went to do my research.
I went to my laptop and typed in his name. I wrote and wrote. There were things scribbled out and rewritten. I wrote ‘till my hand ached.I stepped back to see what i had made. Yes there was a mess on the floor and on my desk, but there was one thing i got out of this. Information, I needed to know more. For a moment i thought and realized I needed to not loose my sanity over this. No matter how bizarre it was. So i took a break, for a while.

I went to my laptop and typed in his name. I wrote and wrote. There were things scribbled out and rewritten. I wrote ‘till my hand ached.I stepped back to see what i had made. Yes there was a mess on the floor and on my desk, but there was one thing i got out of this. Information, I needed to know more. For a moment i thought and realized I needed to not loose my sanity over this. No matter how bizarre it was. So i took a break, for a while.
“ Uriel; ArchAngel. One out many Seven angels above other angels. God uses them for his work on Earth. Uriel is one of the archangels of post-Exilic Rabbinic tradition, and also of certain Christian traditions. In Christian apocryphal gospels Uriel plays a role, differing between sources, in the rescue of Jesus' cousin John the Baptist from the Massacre of the Innocents ordered by King Herod. He carries John and his mother Saint Elizabeth to join the Holy Family after their flight into Egypt. Uriel, in charge of the Orb of the Sun, serves as the eyes of God, but unwittingly steers Satan towards the newly created earth.”
The more I wrote the more I understood. With every word came a new answer, an answer to one of my millions of questions. So I continued;

“Uriel is known as the angel of wisdom. He shines the light of God’s truth into the darkness of confusion. People sometimes ask for Uriel’s help to seek God’s will before making decisions, come up with fresh creative ideas, learn new information, solve problems, resolve conflicts, let go of destructive emotions such as anxiety anxiety and anger that can prevent them from discerning wisdom, and recognize dangerous situations so they can try to avoid them. . A ?. A: (His Symbol).”
I felt I had enough info for now. So I close my laptop and went to the living room. 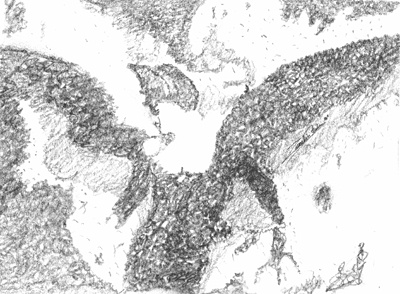 Just the little i've written of this new book im writing. please comment if you like it t see if i should continue it.