The Flames of This World | Teen Ink

The Flames of This World

Three days since Esmeralda’s death. Three days since the soldiers had come to bear her beautiful body away to be buried – or at least dumped where the smell would not offend his aristocratic sensitivities. Three days since Claude Frollo had held her head in his lap and felt her warm blood soaking through his robe against his skin. Three days.

Anyone who inquired after him during that period of time always received the same answer. The Judge was nothing more than a restless specter, drifting up and down the halls, at all hours of the day and night, often carrying a heavy Bible in his hands and babbling in Latin. Other times, he was seen sitting by the fireplace, where he would remain immobile and completely silent for hours on end. The cook complained that he was forgetting to eat, that she had to all but stalk up the stairs and force food into his mouth just to ensure that he didn’t starve to death. The physicians came, but he angrily turned them away. They could not possibly understand the grief that was constantly gnawing on his tormented soul. They could not even begin to grasp the greedy black emptiness that consumed his thoughts, which left him staring into the flames of the fire thinking of absolutely nothing.

They could not understand, he wouldn’t even try to make them understand. He would not wish such an amount of grief on anyone, no matter how great their sins. He could not understand why God continued to punish him, even after the gypsy’s death! Was this to go on forever? Was this to continue until finally; mad with grief and emptiness, Frollo hurled himself from the window? And even then, what? Would he be condemned to hell, to suffer for all eternity?

Hell… would he meet her there? Or was there a special corner of hell, reserved for heathen gypsies in particular? Or was it exactly opposite of Paris? Did the gypsies wander the streets freely, where they laughed and jeered and threw stones at the good faithful men and women that they had managed to bring down with them? Frollo had seen many such cases, and had been forced to condemn both parties. He shuddered to think of what lie in wait for him by the river Styx. His exhausted imagination kicked into overdrive, and he could just see them, all his victims slaughtered in the name of justice and religion lined up by the bank, stones in their hands and hostile, nearly bestial grins on their distorted faces. The mental image made him recoil and draw his cape closer around his shoulders. Tears were threatening to fall and for once, Frollo let them fall. He had long ago given up on suppressing them. The servants didn’t come near, even though he knew they feared for his health. God couldn’t see them; God had turned His back on Frollo and left the man to reap the consequences of his own weakness. No, Frollo was absolutely, utterly alone. He had no wish for human company and received none. Truthfully, he longed for death.

“Death will come to me, in its own good time,” he said quietly to no one in particular.

But why fight it? Why resist? Why linger for any longer than is required, tormented, wretched! Why let anyone see what you have become? Bear witness to your pain? You, Judge Dom Claude Frollo, who is supposed to be their example! You, disgraced! You, brought down from your high pedestal and stomped on by the heel of God himself all for the lust of a mere gypsy…

Bile burned in his throat and Frollo raked a hand through his iron gray hair. “Enough!” he stood, but it was far more than he had done in days, and the effort cost him nearly all his strength. To keep from toppling over, he grabbed the side of the velvet chair, and steadied himself. “I will go,” he said, more calmly. “For love of her I seek out death, and,” he swallowed. “May God have mercy on me!” 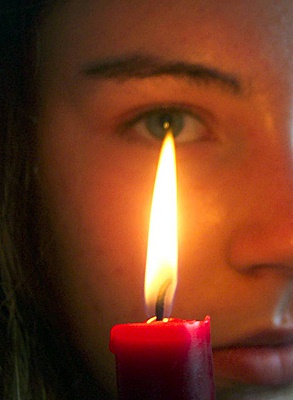 KingBrack BRONZE said...
on Nov. 3 2015 at 10:27 pm
KingBrack BRONZE, White Castle, Louisiana
2 articles 0 photos 4 comments
View profile
“May God have mercy on me!” I was intrigued by this line because most people in the world believe in Yahshua, Hebrew name for Jesus, and they want God to love, care, and protect them.
DomClaudeFrollo GOLD said...
on Dec. 23 2009 at 10:26 am
DomClaudeFrollo GOLD, Greenville, North Carolina
10 articles 1 photo 8 comments

View profile
Thank you kindly :) I see everything in Frollo. I see a tormented man with a dark sense of humor and complete devotion to his God. His lust for Esmeralda was the most natural thing in the world, but he acted badly on it because inside, he was trying to reconcile carnal desires with his religious beliefs. I think in the end he just needed a bit of understanding.
straycat SILVER said...
on Dec. 22 2009 at 5:21 pm
straycat SILVER, Hatboro, Pennsylvania
5 articles 0 photos 16 comments

Favorite Quote:
I write entirely to find out what I'm thinking, what I'm looking at, what I see and what it means. What I want and what I fear.
Joan Didion

View profile
A little bit of both, believe it or not. Frollo is such a dark, complex character to me ... I think there is so much more to him than either book or movie let on... so I like to combine the two very often. I am known very well for my rabid Frollo fandom. ;)
zman1 PLATINUM said...
on Dec. 18 2009 at 9:38 pm
zman1 PLATINUM, Bethesda, Maryland
45 articles 0 photos 31 comments

Favorite Quote:
You unlock this door with the key of imagination. Beyond it is another dimension - a dimension of sound, a dimension of sight, a dimension of mind. You're moving into a land of both shadow and substance, of things and ideas. You've just crossed over into the Twilight Zone.

View profile
Wow, what inspired you to write this? Victor Hugo's original version or your own spin on the Disney version.