Favorite Quote:
"And this, our life, exempt from public haunt, finds tongues in trees, books in the running brooks, sermons in stones, and good in everything." -- William Shakespeare

The cool mud engulfs my bare feet as I walk lethargically through the woods. I push an empty branch away with my dirty arm; a mistake; the branch breaks. The loud crack of a dead branch breaking echoes through the empty forest. I bite my dry lip and scrunch my eyes shut, praying they didn’t hear me. I hear voices in the distance. A rough voice yells “This way! Over there!” A dog barks harshly and I know it is time to run.

I pump my arms as fast as I can to gain momentum. The sooner I get to the river the better. Their dogs won’t be able to track me through the water. I know just past the next big rock is the jumping off point; a sheer cliff tykes jump off in the summer, into the cool clear water of the river. I pray the hunters haven’t already been there and set traps.

I clamber through the well known forest, easily climbing and jumping over logs and rocks. I leap over a large rock and land, unfortunately, on an arrow left over from a hunt. I yelp loudly in pain without thinking. I know they heard me. I try to run faster, I am almost there! The trees thin and I see the cliff. I run faster, but am hindered by my bloody foot. I shut my eyes and take a trusting leap off the cliff before I can think better of it. For a few moments I sail through the air. One last breath before I am surrounded by frigid water. It is much colder than I expected, and as I surface I gasp for breath. The freezing water and air pressing me making my breathes sharp and painful. I swim towards the cliff and into a little hidden nook under it. I feel the mud leaving my darkly tanned skin. I am tempted to splash my face, but I can’t risk the noise. Instead, I endure the taste of muddy, sweaty water dripping from my brow onto my pursed lips.

I look down at my foot, “Not so bad,” I think, seeing only a small cut, now clean. It is then I realize I am looking at the wrong foot. Moving my gaze to my other foot, I wince at the sight. The large cut is still mercilessly releasing blood into the water. About the size of my thumb, I can see it is deep. The gash, along the side of my foot, will render my foot paltry if I don’t let it heal. I know I can’t afford to do much running within the next moon.

The hunters are just now arriving. I hear the harsh, crunching steps of boots on the dead, fallen leaves on the ground.

“She’s not here!” Someone yells. I recognize the scratchy voice as that of the hefty gunman with the dog.

He must have been faster than rest, and arrived first. His heavy breathing begins to slow, and he realizes he is alone. I think about pulling an arrow from its quiver, slung onto my back, but I won’t stoop to their level, not yet anyways.

I am thankful I didn’t shoot him, because it would have caused a scene, and I wouldn’t have had time to run off. The other hunters are now arriving. I hear them come from all different angles…a failed ambush, I suppose.

“If she jumped, she died,” concluded an unknown voice.

“Or run off,” said another.

“It doesn’t matter, it’s getting dark anyway. If she’s out there, the beasts will get her. She’ll be nothing but a carrion in the morn’”

I smile, almost laugh. Are their brains hollow? I’ve been roaming these woods all my life. I know these forests like I know the constellations of the night sky, or the creation story of my tribe. I’d never get lost, and I’d let the animals take me before I let the hunters take me to their penitentiary. They are not beasts, only friends.

I stay where I am long after the last of the hunters footsteps had faded. The pain in my foot has subsided a little, but I know I must get back to my tribe and get some medicinal herbs on it to mitigate the effects. “Honorable warriors do not have lame feet,” I tell myself. I must continue on. I swim a little, leaving the hidden cavern, until I get to shallower waters where I may make an attempt to walk. For the most part, the riverbed is soft sand, soothing to the rough soles of my feet. The occasional rock makes me wince in pain, but I look up to the moon and thank the Master of Life that the hunters aren’t smart. The arbitrary troops will never find me.

The sun rises over the distant mountains solemnly. The grass sways a little with the wind. The rest of my tribe will be awakening soon, but I have been up for hours. Sitting up on my elbows, thinking and watching. I stroke the cool grass with my fingertips, and bask in the shy morning sun. I close my eyes and sigh, wondering what today will hold.

There are a few clouds in the sky, but not many. The ones that do float there are pure and whole white puffs. The sky is a beautiful thing, and it makes me think of my mother, Mapiya. Her name means sky. If it weren’t for her name, she probably never would have met my father, Mahkah – his name means earth. The whole tribe thought they were meant to be, as the elements complete eachother just as my parents do now. After my brother Wynono (meaning firstborn), they named my second brother Wamblee, or Thunder, offspring of the sky. My younger brother is Tokala, meaning Fox, child of the earth. I am their only daughter, and was named Tiponi, meaning “child of importance”. I know I am destined for greatness, but when and where is still a mystery. This is one of the many things I think about here, in the cool morning air.

Growing up in a family of men has been different from that of the life of my friend Ehawee, or Laughing Maiden. Her family is three girls, and no sons. All she ever does is cook and sew. But that is not the life I live, or even want to live, though it is expected of me. I practice archery and hunting with my brothers. When I am allowed, I even hunt with them. One day, I wish to one of the greatest warriors my tribe has ever known. I only want to make them proud. My mother says the only way to do that is to be a proper woman. I try to follow my mother’s direction, but I can never remember what plants make which color dyes or which herbs to use. Ehawee helps me, sometimes. She tries to make fun games to help me remember to make the easiest of soups, but I always mess it up anyway.

A cool breeze rustles the trees and I lay back, resting my head on my hands and looking straight up to the heavens. I close my eyes and pray for a sign.

“Tokala you always mess it up!” Wynono says angrily for the third time already today.

“Wynono I can hunt better than anyone else here, it is not my fault you do not know how to properly set an arrow!”

“I didn’t set the arrow, Wamblee did!”

As my brothers fight, I walk over to the fallen arrow and pick it up. Resting the gentle piece of wood in my palms, I survey the damage. The arrow itself is made of fine wood, strong and thick. The point is nicely carved hard stone, and is not chipped, but is loose. I deftly re-tie the stone to the wood and pull out my own bow. I take careful aim and shoot the arrow. It whizzes past Wynono’s head and deep into the tree he leans on him. He turns to me, his face angry.

“Tiponi you need to stop that!” He shouts over the laughter of my other two brothers.

“It’s not my fault you can’t tie a stone to wood!” I said laughing.

Ehawee watches from her spot in the grass nearby.

“I don’t understand how you do it,” she sighs to me.

“I am not a man, I am a woman with the skills of a warrior, and lacking those of a mother,” I say the last part solemnly. The rest I am proud of, but it saddens me that I will never be able to cook or sew like Ehawee or my mother.

“You’re lucky you missed your brother’s head there, though,”

“Missed? I aimed for the tree, I just wanted to scare him,” I laugh.

“Oh.” She says, and looks off blankly.

She sits quietly, gazing off into the distance. There's nothing more to say. 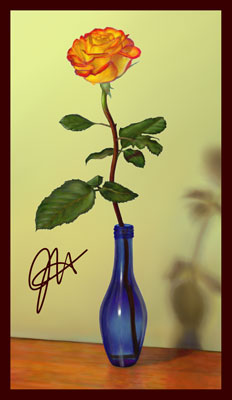 The author's comments:
This, too, started off as an English class assignment. It is told from the perspective of a young native american girl. strange new pale-skins are beginning to threaten her tribe but, as a girl, her chances of becoming a faithful and acclaimed warrior are slim, and her chances of battling the intruders and winning are even slimmer.
(note: all the tribal names are legitimate, i did some research, i did not make up names)
Post a comment
Submit your own

Favorite Quote:
Laugh until we think we'll die, barefoot on a summer's night, nothin new is sweeter than with you.